By YEKATERINA KRAVTSOVA of the Moscow Times

AS THE last Greenpeace activist detained in the Arctic 30 protest received notification today that he was cleared of all charges under a recently passed amnesty, several other international activists who had already been granted amnesty have received permission to leave Russia.

The news marks the end of a saga that has seen activists of 19 different nationalities spend several weeks in Russian detention despite an international outcry over the case and Western demands to release the suspects.

Twenty-eight Greenpeace activists, as well as a Russian photographer and a British videographer, were charged with "piracy" - which was later changed to "hooliganism" - for staging a protest against oil drilling at Gazprom's Prirazlomnaya oil platform in the Barents Sea in September.

As of today, seven members of the group had been granted visas from the Federal Migration Service, while others expected to receive their visas by the end of the week.

Activists from countries that share a visa-free regime with Russia - Ukraine, Brazil, Turkey and Argentina - were allowed to leave the country immediately.

Read more »
Posted by café pacific at 6:31 PM No comments:

Merry Christmas and blessings for 2014! 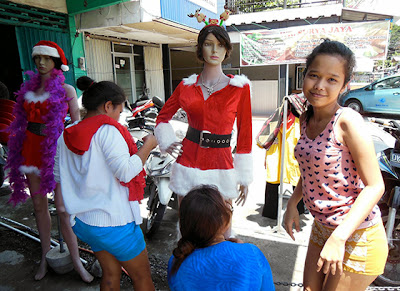 A GROUP of Balinese show off some Christmas cheer outside their store in the urban neighbourhood of Tuban, near Ngurah Rai international airport - named after an independence revolutionary hero. Images are in David Robie's Bali 2013 gallery.

Merry Christmas to all our loyal Café Pacific readers  ... and have a good year in 2014.

Posted by café pacific at 5:39 PM No comments:

THE "Caveman" rugby star Sebastien Chabal has been a real knockout this week. He hit the headlines in France over for this KO blow on number eight Marc Giraud during the second division ProD2 match between Lyons and Agen at the weekend.

Giraud was carried off on a stretcher. Now aged 35, the former French icon is still playing rugby, plying his sporting prowess with Lyons in France.

He built a reputation for not only looking like one of the scariest men in the sport, but playing like it too, famously breaking All Black Ali Williams' jaw and knocking out Chris Masoe.

Not too long ago he announced that this would be his final season of rugby due to his body starting to feel the aches and pains that come with playing professionally for so long.

He clearly hasn't lost any of the competitive spirit though, as was seen, and felt by Agen eighthman Giraud.

Quote from the Timor-Leste development and resources watchdog La'o Hamutuk over the recent news agency 'false report' on a demonstration over Australian duplicity over the Timor Sea disputed oil and gas industry:

Why are the world's media so eager to report lies about violence committed by people from Timor-Leste, but so reluctant -- in the past and still today -- to report truthfully on those who commit violence against them?

This was from a recent article posted by the NGO on its blog over allegations of fabrication by a news agency stringer and condemning media reluctance to correct the facts.

ANALYSIS: ON Thursday, 5 December, about 20 students and activists peacefully protested across the street from the Australian Embassy in Dili to urge Australia to respect Timor-Leste's sovereignty and rights to its undersea oil and gas.

In their statement (original Tetum), they urged Australia to "stop stealing and occupying the Timor Sea, but show your good will as a large nation which follows democratic principles to accept a maritime boundary based on international legal principles."

Read more »
Posted by café pacific at 9:20 PM No comments:

A MULTIMEDIA news report series about the torture of a fugitive prisoner and his suspected accomplice by Fiji prison officers has won a Pacific Media Watch editor a coveted international prize in trauma journalism.

Daniel Drageset, a Norwegian journalist interned at the Auckland University of Technology’s Pacific Media Centre and a postgraduate student in the School of Communication Studies, won the Dart Asia-Pacific Centre for Journalism and Trauma Prize for reporting on violence, disaster or trauma in society at the 2013 Ossie Awards for student journalism in Mooloolaba, Queensland, this week.

Drageset has been contributing editor of the PMC’s Pacific Media Watch freedom project for the past year, and has also been a student intern editor on the associated independent Pacific Scoop news website.

“Daniel had to straddle important ethical issues and clarify potential bias of sources to produce an impressive piece of reporting,” she said.

Read more »
Posted by café pacific at 5:11 AM No comments:

Mandela, Indonesia and the liberation of Timor-Leste

Nelson Mandela, who became one of the world's most beloved statesmen and a colossus of the 20th century when he emerged from 27 years in prison to negotiate an end to white minority rule in South Africa, has died. He was 95. His death closed the final chapter in South Africa's struggle to cast off apartheid, leaving the world with indelible memories of a man of astonishing grace and good humor. - Al Jazeera

In July this year, on the occasion of hs birthday, journalist ABOEPRIJADI SANTOSO wrote this tribute to Mandela’s role in Timor-Leste independence.

WHEN he turned 95 years old, the late South African president Nelson Rolihlahla Mandela may have reflected on his struggle and his contribution with great satisfaction more than anyone else could. Popularly known as Madiba, he became an icon of freedom, reconciliation and hope the world over.

Much less known is his legacy to help liberate the people of Timor-Leste.

In 1955 Mandela lauded the historic Asia-Africa Conference held in Bandung. Two leading members of the African National Congress (ANC) - including his close ally Walter Sisulu - were there to represent their country.

Indonesia continued its support for the movement and provided the platform for the Asian struggle against apartheid, which Mandela respected.

Mandela, fond of batik shirts, loves Indonesia and visited four times: 1990, 1994, 1997 and 2002. The first time he came he visited the site of Bandung conference and said he was inspired by the Asia-Africa Conference and Sukarno's role.

Read more »
Posted by café pacific at 8:12 PM No comments:

An alternative view to the mainstream media coverage on the Timor Sea issue. A statement from the Movement against the Occupation of the Timor Sea, a Timor-Leste activist group that has been smeared by a false AFP report about a demonstration across the road from the Autralian Embassy in the East Timorese capital of Dili on December 5:

FOR MANY years, Australia has been stealing the oil and gas from the Timor Sea, in an area which belongs to Timor-Leste under international legal principles.

Sadly, Australia has shown its manner and its greed to make our small and poor country in this region lose our resources and sovereignty.

After it became aware of the oil and gas reserves in the Timor Sea, Australia supported Indonesia for more than two decades as it committed genocide against the people of this land, stealing and using its strong economic and political power to trample us, making themselves rich by leaving us in poverty.

A few days ago, the Australian government used its intelligence service to seize documents from Timor-Leste's lawyer in the CMATS (Certain Maritime Arrangements in the Timor Sea) arbitration case, and to put pressure on a "whistleblower" so that he could not testify.

Read more »
Posted by café pacific at 7:27 PM No comments:

Taking on the challenge of Timor-Leste's media in transition

By DAVID ROBIE in Dili

TIMOR-LESTE newspaper editor and investigative journalist Jose Belo is no stranger to controversy, legal threats or the inside of a prison cell.

He was imprisoned and tortured by the Indonesian occupation forces for a period during the 24 years of illegal occupation of Timor-Leste while smuggling out reports to the world from the beleagured resistance movement.

Five years ago he was threatened with a seven-year prison sentence for criminal defamation over allegations of corruption against the then justice minister.

This prompted a high-profile international appeal by journalists, academics and media freedom campaigners to then President Jose Ramos-Horta to have the case dropped.

Threats are common over Belo's campaigns to root out corruption and nepotism in his fledgling Asia-Pacific state - the world's newest nation barely a decade old.

Read more »
Posted by café pacific at 5:49 PM No comments:

Report by The Independente in Dili
AUSTRALIA should stop "short-changing" Timor-Leste with "shoddy deals" over oil and gas and establish permanent maritime boundaries with its island nation neighbour, says a Timor Sea justice advocate.

In a strongly worded statement, Clarke kept up his criticism of the Australian government's strategy of manoeuvring Timor-Leste into temporary resource-sharing agreements over oil and gas extraction in the Timor Sea, arguing such contracts were not a long-term solution.

"Only permanent maritime boundaries - established in accordance with current international law - can put this matter to rest," he said.

"Prime Minister [Tony] Abbott has a chance to cement Australia's strong relationship with Timor-Leste by agreeing to permanent boundaries that would ensure Timor-Leste is not being short-changed through shoddy deals regarding oil and gas resources."

Read more »
Posted by café pacific at 7:14 PM No comments: