(Note: This commentary is extracted from David Robie's notes as part of a multimedia keynote presentation at the Enhancing a Human Rights-based Approach to News Reporting Forum in Nadi, Fiji, 13-15 April 2016 . The notes were written originally to go with a series of slides and embedded video clips).

SOME of you perhaps may be mystified or puzzled about why I have included the term ‘mindful’ journalism in the title of this presentation. I’ll explain later on as we get into this keynote talk. But for the moment, let’s call it part of a global attempt to reintroduce “ethics” and “compassion” into journalism, and why this is important in a human rights context. 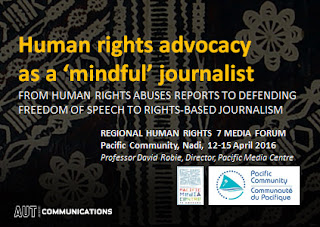 Human rights has taken a battering in recent times across the world, and perhaps in the West nowhere as seriously as in France on two occasions last year and Brussels last month. After the earlier massacre of some 12 people in the attack on the satirical magazine Charlie Hebdo in January, there was a massive wave of rallies in defiance and in defence of freedom of speech symbolised by the hashtag #JeSuisCharlie – I am Charlie.

Investigators in both Belgium and France worked on the links between the two series of attacks and have made a breakthrough in arresting two key figures alleged to be at the heart of the conspiracy, Salah Abdeslam and Mohamed Abrini, a 31-year-old Belgian-Morrocan suspected to be the “man in the hat” responsible for the bomb that didn’t go off at Brussels airport.
Read more »
Posted by café pacific at 5:18 AM No comments:

Read more »
Posted by café pacific at 8:39 PM No comments: