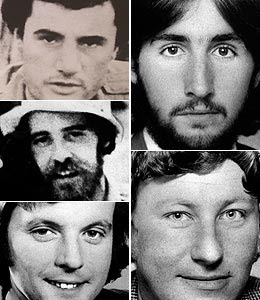 The New South Wales state coroner's verdict over the deaths of the Balibo Five journalists is that Brian Peters was deliberately killed to prevent him from revealing Indonesian Special Forces had taken part in the attack on Balibo at the start of the invasion of East Timor in 1975. Deputy State Coroner Dorelle Pinch ruled:
Brian Raymond Peters, in the company of fellow journalists Gary James Cunningham, Malcolm Harvie Rennie, Gregory John Shackleton and Anthony John Stewart, collectively known as "the Balibo Five", died at Balibo in Timor-Leste on 16 October 1975 from wounds sustained when he was shot and/or stabbed deliberately, and not in the heat of battle, by members of the Indonesian Special Forces, including Christoforus da Silva and Captain Yunus Yosfiah on the orders of Captain Yosfiah, to prevent him for revelaing that Indonesian Special Forces had participated in the attack on Balibo. There is strong circumstantial evidence that those orders emanated from the Head of the Indonesian Special Forces, Major-General Benny Murdani to Colonel Kalbuadi, Special Forces Group Commander in Timor, and then to Captian Yosfiah.
Coroner Pinch also recommended that a 'national industry-wide Safety Code of Practice for journalists' should be developed in partnership with Australia's media organisations.
Pictured: The five who were murdered - Greg Shackleton (clockwise from top left), Tony Stewart, Greg Cunningham, Malcolm Rennie and Brian Peters.

The NSW Coroner, Dorelle Pinch has just released her judgment in the inquest held earlier this year into the deaths of the five Australian based journalists at Balibo in East Timor in 1975. One of the five, photographer Gary Cunningham, was a New Zealander.

The coroner has concluded that the five Australian based journalists were deliberately killed to prevent them from exposing details of Indonesia’s invasion of East Timor. She has called on Federal Attorney General Phillip Ruddock to consider prosecuting members of Indonesian special forces. Those named as responsible are Captain Mohammed Yunus Yosfiah who gave the orders for the killings and Christoforus da Silva. The Coroner’s Counsel Mark Tedeschi earlier said that the Geneva Protocols are applicable as Under Article 147 the deliberate killing of civilian non-combatants in war-like situations, constituted an a war crime, punishable with up to life imprisonment.

The evidence presented at the inquest pointed to the culpability of Australian politicians and officials who were complicit with Indonesia in covering up these crimes as well as Indonesia’s plans to invade and occupy East Timor. The actions of New Zealand officials in 1975 paralleled those of their Australian colleagues, and New Zealand largely disowned Gary choosing to emphasise that he was working and living in Australia at the time of his death.

The New Zealand Government has also chosen over the years to take a hands off stance to enquiries held into the journalists’ deaths – always leaving it to Australia to ‘investigate’ the deaths, despite appeals to become involved from Gary’s family.

However, the Coroner’s judgment must now be the catalyst for New Zealand to become involved in seeking justice for this crime which was pivotal to East Timor’s tragic story.

The Indonesia Human Rights Committee will now be urging the Prime Minister and Minister of Foreign Affairs to take this issue to the Solicitor General to ask him to advise on the way forward under provisions in New Zealand and international law.