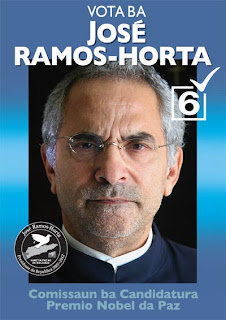 Australia now rues the botched bid to arrest renegade Major Alfredo Reinado in a violent raid on his mountain hideout last year that saw five of the rebel's men killed. According to The Age, Australian and other forces (including from New Zealand) are bracing for possible reprisal attacks following the death of Reinado, who had been charged with murder. He was shot in return fire when gunmen led by Reinado wounded President Jose Ramos-Horta in a dawn assassination attempt. Ramos-Horta had last year waived an arrest warrant for Reinado, deciding instead to seek talks and a peaceful resolution. But meaningful negotiations never eventuated. While Dili is reported to be calm, the attack jeopardises the efforts to normalise the country. The Age's account:
East Timor has been plunged into a new crisis by failed assassination attempts on its two top leaders and the killing of a rebel military leader.
East Timor President Jose Ramos-Horta was shot and wounded in a dawn attack on his Dili home by gunmen led by rebel soldier Major Alfredo Reinado, who was killed in return fire, the government said.
A presidential guard was injured.
Timorese Foreign Minister Zacarias da Costa said Ramos-Horta had undergone exploratory surgery at the Australian military hospital in Dili. Da Costa described the president's condition as "stable".
"He underwent surgery to locate bullets. One had hit him in the back and passed through to the stomach," he said.
It is understood Ramos-Horta will be flown to Darwin for further treatment. Royal Darwin Hospital is on standby.
"He will survive, and this country will survive", said Deputy Prime Minister Jose Luis Guterres. Ninety minutes after the first attack, Prime Minister Xanana Gusmao escaped unhurt when his car was ambushed and shot at as he drove to his offices to deal with the crisis.
Gusmao's home was also attacked, bodyguards said.
Pictured: A election poster during last year's election campaign that swept Ramos-Horta to the presidency.
Posted by café pacific at 9:49 PM