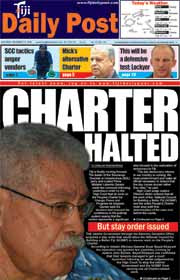 YET ANOTHER example of local Fiji media bias ushered in the weekend editions of the press, this time over the High Court ruling that all work must halt on the People's Charter for Change, Peace and Progress. The Daily Post, for example, editorialised in its front page splash story "Charter halted": "Fiji is finally moving forward."

Inexcusable for an intro on the court ruling purporting to be fact. Of course, the next sentence attributed the opinion to deposed Prime Minister Laisenia Qarase (who incidentally became appointed caretaker prime minister after the George Speight coup in May 2000, thanks to the military). Now, the editorial handling of the story wouldn't have anything to do with the fact that the media group is steered by Qarase's first cousin while the editor is his son-in-law.

Secondly, a ruling hours later by the Court of Appeal's Justice John Byrne actually imposing a stay on the judgment by Justice Filimoni Jitoko (until a substantive appeal hearing on Thursday, November 20) didn't get mentioned in the story. (However, it was flagged in a downpage strapline). The regime is seeking a judicial review on the ground that under the Proceedings Act the court cannot order an injunction against the state. Fijilive reported it this way as main news item: Charter work to continue, stay granted: "The interim government has successfully acquired a court injunction that will allow the National Council for Building a Better Fiji to resume work on the People’s Charter."

Other local coverage wasn't much better. Fiji free press at work? Some of the international media coverage was an improvement. Australian Associated Press reported: "Fiji's High Court has delivered a blow to the country's military-led government, ordering it to halt work on a document that would usher in constitutional changes." But even then, it didn't reveal all the fishhooks involved in the legal minefield.

Over at Avaiki Nius, Jason Brown has highlighted a persistent Pacific media problem - no-shows at donor expense. Another good read at the Pacific Media Centre is the latest fallout from the Niu FM saga earlier this year. But things are definitely on the mend. Pere Maitai is doing some great things in rebuilding the news service.