High points in media coverage of the Samoa tsunami 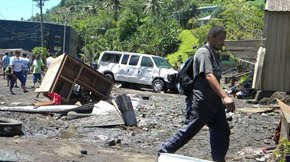 MEDIA reflections on the New Zealand media coverage of the September 29 earthquake in the two Samoas and in Tonga’s northerly Nuias have been few and sketchy. Radio New Zealand’s Mediawatch had an item while the New Zealand Herald’s John Drinnan did a quick rundown on early reports. Crikey in Australia looked at the current phenomenon of quakes, tsunamis and flooding in the Pacific, Indonesia, Philippines and Vietnam, not that there was any direct connection. John Minto wrote about the country's emerging sense of Pasifika identity.

But TVNZ’s digital Media7 programme takes the Café Pacific prize for its insightful and in-depth programme on the tsunami coverage. Two of the three journalists on the panel were Pacific Islands journalists themselves, reflecting a maturing of media coverage which is finally recognising the value of reporting the Pacific region with Pasifika journalists rather than relying on a sometimes skewed palagi perspective. In this case, two of the journalists had Samoan cultural and language ties – Tagata Pasifika’s Adrian Stevanon and Radio New Zealand’s Leilani Momoisea. The third commentator was TVNZ’s Lisa Owen, who has previous experience of reporting in so-called “trauma journalism” zones – such as the London tube bombing in 2005, the Madrid terrorist bombing in 2004 and the Israeli-Palestinian conflict.

In spite of her previous experience of reporting tragedies, Owen found herself on the first New Zealand flight to Samoa after the tsunami struck and immediately thrust into unfamiliar territory. Many grieving relatives were sharing that flight: “Journalists and victims, if you like, shoulder to shoulder.”

Stevanon, working for both TVNZ One News (as cameraman) and Tagata Pasifika weekly magazine programme (reporter), journeyed to Samoa not sure at that stage on the fate of many of his own relatives. (As it turned out, all his extended family were okay, even in the most devastated areas of southern Upolu). What about the challenges of his contrasting roles for his network?

Working for news, then it’s standard news. What is happening right here and right now? But for our audience [at Tagata Pasifika], they’ve already seen all that. So, in my mind, I couldn’t just show death and destruction, I needed to offer something else. I needed to do a Phoenix-from-the-ashes and that’s what people were trying to tell me anyway.

Tonga, unfortunately, was shunted aside in the media priority stakes – even though nine lives were lost on the remote island of Niuatoputapu. Some of the better distance reporting to make sense of events there came from Pacific Scoop and Pacific Media Watch’s Josephine Latu, herself Tongan.

Crikey tried to make sense of the Pacific-wide crises:

Over the past few weeks, the Asia-Pacific region has seen natural disasters of epic proportions. There have been typhoons, tsunamis and earthquakes; the death toll climbing higher each day. Entire villages have seemingly been wiped out. The media coverage of the unfolding events has, however, been overwhelming. The Australian media predictably focused on the local angle, but which earthquake or tsunami happened first, where and why? And are they all connected?

Crikey pulled together a timeline to give an overview.

While generally complimentary about Radio NZ’s coverage – which has a key role in emergencies, John Drinnan, writing in his weekly Media column for the Herald, was less flattering about TVNZ in his “Not a good morning for advertorials” piece:

RNZ's counterpart - Television New Zealand - made some surprising decisions on the morning amid warnings a tsunami may be racing toward New Zealand and was due to hit Auckland at about 11.12am.
On Breakfast, Paul Henry provided a sense of urgency and concern. Yet when Henry was finished, and with the tsunami potentially about to hit the East Cape within the hour, state television went live with its advertorial show Good Morning, albeit with newsbreaks on the half hour.
TVNZ rejected a suggestion it had underestimated the gravity of the situation and even rang the NZ government to offer a camera for the Beehive bunker used during emergencies.