How the Pacific Murdoch times are changing 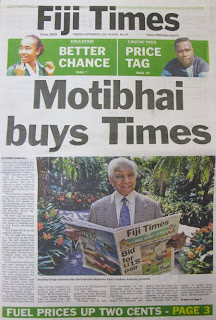 APART from a banner headline in The Fiji Times, “Motibhai buys Times,” on a front page story bylined by a local reporter but based on a News Ltd handout, the enforced sale of the country’s oldest newspaper has been remarkably under reported.

No serious analysis, no editorials and certainly no backgrounder. Another sign of the times post-censorship. Even the Fiji Times itself did not remark editorially about the sale of the 141-year-old paper.

Australia-based News Ltd is bailing out completely. Once the regulatory niceties have been done by September 22, it will be goodbye Rupert Murdoch in Fiji. Speculation by the Fiji Sun that the company’s valuable downtown Suva real estate holdings had not been sold has proved wrong.

Fiji Times managing editor Anne Fussell had a letter published in the Sun at the weekend saying a statement by the newspaper that Fussell had told senior Times staff that “real estate is not included in the sale” was a “complete fabrication”.

“The inevitable result of writing a story which has written this untruth is that the headline is also a misleading untruth,” Fussell wrote.

“In fact, the real estate is included in the sale.”

The Fiji Sun replied with an editor’s note saying the report (not published in the online edition) was “based on information provided by Fiji Times staff following a meeting there”. The paper also pointed out that it had since reported that Motibhai h

ad bought all the property, “including the executive house occupied by Ms Fussell”.

Stack of letters
The Fiji Times ran a stack of letters congratulating the Motibhai group for “keeping it in the family” and buying out the FT. (All media companies were forced by the regime to divest at least 90 percent of the shareholding to local owners by September 28, or face being deregistered under the new Media Industry Development Decree. The Fiji Times group, the only completely foreign owned media company in Fiji, is selling up completely). 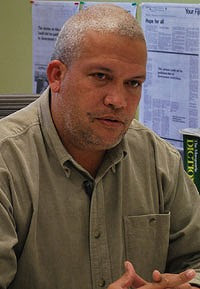 One letter praised Motibhai’s “courageous step” and saving “a couple of thousand jobs”.

“With modern technology, a lot of print news companies in the USA are on the brink of closing down and becoming history.

“To name a few newspapers that are fighting for their survival – The New York Times, Washington Post and the Los Angeles Times.

“The newspapers have been around for ages and during their peak were read not only in the US, but also abroad.”

Another letter said: “The Motibhai Group [has] a proven track record of how they’re able to transform businesses they acquire into household brand names and I know they will do the same with our oldest daily, The Fiji Times.”

But there was no debate – amid the censorship climate – of the implications of both Fiji’s two national daily newspapers being owned by rival Gujerati business chains. Or any discussion about the future of the editor, outspoken regime critic Netani Rika and senior editorial staff. For 141 years until now, The Fiji Times, for all its flaws, has been owned by dedicated newspaper publishing interests. News Ltd bought the Fiji Times and the (now closed) Pacific Islands Monthly from the Herald and Weekly Times group, which had in turn bought the publications from the Wilke Group.

Market slump
It is easy to see how the Fiji Times has slumped from its once totally dominant market share: Starved of Fiji government advertising, the weekend Fiji Times only totaled 80 pages. But its regime-fawning competitor, Fiji Sun, had 128 pages plus a 30-page glossy Showtime/Garam Masala magazine liftout.

Already, the Malaysian-owned National in Papua New Guinea had long ago taken over from the mostly Australian-owned newspaper Post-Courier - now the only Murdoch outpost in the islands - as the leading circulation daily.

Australian newspaper publishers have been knocked off their perch in the Pacific. How times are changing.