Behind the 'French farce' and Kiwi rugby arrogance 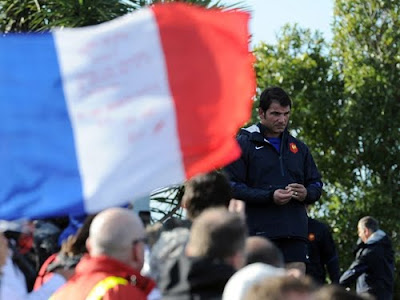 EXTRAORDINARY HYPE in the New Zealand media this week about the alleged France "B" team playing the All Blacks this weekend in the Rugby World Cup. In fact, 11 of the French players have tasted victory (plus two among the reserves) over New Zealand, and some twice! This thanks to KiwiRooster:

The likes of Peter Bills and Chris Rattue are not exactly what we call journalists of investigation, they are more into the trashy business of making sensational stories. Hence the reason why Peter Bills does not feel he has to justify his rant by telling us which French players he would have selected. Not mentioning the fact that Peter Bills does not represent the whole of New Zealand, maybe not even part of Great Britain, given he is apparently British.

Anyone who has watched the French games against Japan then Canada must have realised that neither Trinh-Duc nor Harinordoquy performed well. (That's an understatement). Bonnaire and Parra did much better. Now, to call that team second string is utterly arrogant:

On the bench: Harinordoquy(*) and Servat (*) might come in as impact players.

Ducalcon and Forestier (who is unfortunately not in this World Cup) formed the best forward pack in the whole French championship with their club Castres Olympiques this season. For any French supporters it is not a surprise to see him here, especially since Thomas Domingo is injured and Sylvain Marconnet got smashed to pieces by pretty much every prop in this squad.