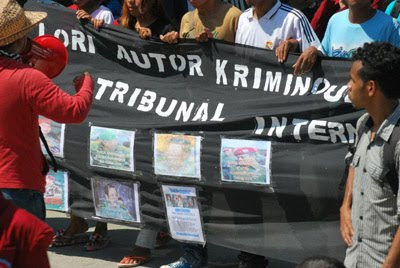 An American social justice and development campaigner who has devoted much of his life to the East Timorese cause and lives in the independent nation, reflects on the struggles since the Santa Cruz massacre in Dili on 12 November 1991. Photo:La’o Hamutuk

By Charles Scheiner in Dili

TONIGHT, I’m honored to be with so many young Timorese people who believe in justice and independence. Twenty years ago, brave people just like you peacefully demonstrated against the Indonesian occupation of your country. Nobody paid them, or ordered them, or told them it would be safe or easy.

The Santa Cruz protesters inspired people around the world, including me. I was in New York, and I heard about the massacre on community radio. Although I already knew about Indonesia’s illegal occupation here, and about the criminal support my US government was giving to it, I hadn’t done much to stop it.

A month after the Santa Cruz massacre, I and some other friends organised a peaceful protest at the Indonesian Mission to the UN. We didn’t risk being shot or tortured, but we knew we had to speak out in solidarity with the heroes of Santa Cruz who risked and lost their lives in the struggle for self-determination.

It was much easier for us than it was for your parents – but it was also hard, because so many other Americans didn’t know or care that our government was complicit with Indonesia in committing crimes against humanity in Timor-Leste.

Our demonstration grew into a movement – the East Timor Action Network (ETAN) – that had more than 15,000 members and 25 chapters all across the United States by 1999.

Through public education, lobbying, demonstrations, outreach, coalition-building and every other kind of nonviolent action we could think of, we turned US policy around.

Washington had provided most of the weapons and training for the Indonesian military from 1975 until 1991, but pressure from American citizens cut it off.

Door opened
By 1998, the United States gtovernment had abandoned Suharto and was supporting self-determination – helping to open a door for the people of Timor-Leste to finally end Indonesia’s occupation.

It’s 12 years later now, 20 years after the Santa Cruz massacre and the founding of the East TimorAction Network.

East Timor has been independent for nine years. You have your own government, your own leaders, your own political debates, your own successes… and your own mistakes.

I feel privileged to live here during this period, traveling that journey with you. Building a peaceful, democratic nation, with economic and social justice for its entire population, may be even harder than throwing out the Indonesian army and police.

We are still far from some of our goals. In particular, the foreigners responsible for crimes against humanity and war crimes committed against the Timorese people have not been held accountable.

These were international crimes – the Indonesian invasion of Portuguese Timor (RDTL after 28 November 1975, but Indonesian aggression started before that) violated international law, as did the thousands of massacres, tortures, rapes, killings and other crimes that were part of the occupation.

When people are ordered or paid by one government to commit crimes against people in another country, those are international crimes. When other governments, including my own, give political, military, diplomatic or financial support to these crimes, they also become criminals.

Apology to Timorese
As a US citizen (I am not yet a Timorese citizen, but hope to become one), I have to apologise to the people of Timor-Leste because I and my fellow Americans took so long to stop our government from supporting crimes against you, while tens of thousands of Timorese people were killed.

As a human being, I join the Timorese people – including survivors and victims’ families – in calling for an end to impunity for crimes against humanity.

A hero of my country – ex-slave Frederick Douglass – once said that “Power never concedes anything without a demand.”

If we want justice, we have to demand it – it will not come by itself.

As you know, there was progress a few years ago. Between 1999 and 2005, Commissions of Inquiry established by the United Nations, Indonesia and Timor-Leste recognised the international nature of the huge crimes committed here and called for the prosecution of those who perpetrated them.

During UNTAET, the UN Serious Crimes Unit indicted nearly 400 people for crimes committed during 1999, bringing 87 to trial and convicting 84. But everyone brought to trial was Timorese, and none of them are still in prison.

None of the people who murdered Santa Cruz protesters 20 years ago were Timorese.

Larger problem
A larger problem is the 300 people indicted by the SCU who have never been arrested because Indonesia is sheltering them. And even more fundamental, no action has been taken against those who directed and executed the 99 percent of occupation-related crimes committed during its first 23 years.

Those perpetrators were carrying out criminal policies of the Suharto dictatorship, and most of them were soldiers following orders from Jakarta, shooting guns made in the United States, flying bombers from Britain or the US, getting political support from Australia or Malaysia or France.

The United Nations says there must never be impunity for Crimes Against Humanity. In 2002, nations from all over the world established the International Criminal Court to try such crimes when national processes are unwilling or unable to – but unfortunately it has no power to judge crimes committed before the court was set up.

In 2005, this global consensus was reflected by a UN Commission of Experts, who concluded that an international tribunal should be created if judicial processes in Indonesia and Timor-Leste fail to achieve justice for crimes committed during Indonesia’s occupation of Timor-Leste.

But today, the UN runs away – they and the other responsible governments and agencies say that Timor-Leste’s government has the responsibility but not the will to end impunity.

For some of us – Timorese and foreigners – the struggle is not over. We draw courage from people like Argentinian justice activist Patricia Isasa, who visited here last month. She campaigned for 33 years before her torturers and kidnappers were finally sent to prison.

Here, our justice campaign is only 12 years old. Although the UN, other governments, and some Timorese politicians prioritise diplomatic relations with formerly hostile nearby governments over justice, and although some say economic development is more important than accountability, there is no need to choose.

Criminal masterminds
Relations between democratic states can go well even while criminals are brought to justice. People’s economic lives – including victims of past crimes — can improve at the same time that masterminds of those crimes are brought to court. There is no need to choose among economic, social and criminal justice.

We, citizens of countries from around the world who support Timor-Leste’s people, will continue to demand that our governments and the United Nations keep their promises that impunity can never be accepted.

Today, ETAN issued a press release calling “for the US and other governments and the United Nations to commit to justice for the victims and their families. The 1991 massacre was a major turning point in Timor-Leste’s struggle for liberation.

“When we saw and heard about the Indonesian military shooting down hundreds of peaceful, unarmed student protesters, we knew we had to do something to stop the killing. The Santa Cruz massacre inspired many around the world to work for justice for the East Timorese people.”

But it will never happen if we don’t continue to demand it. People in Timor-Leste, together with our friends in Indonesia, the United States and around the world, should see today’s anniversary as an opportunity – and a challenge – to renew our commitment to struggle for justice.

Since neither the Indonesian nor Timor-Leste governments are yet ready to end impunity, it is up to us.