French rugby: Once the whipping boys, now the rulers of the game 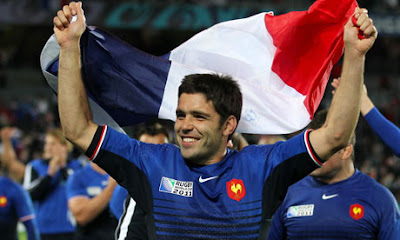 AN IRISH perspective on this month's cancelled Paris match on a frozen Stade de France, barely three months after the French Bleus almost won the World Cup against the All Blacks. Pictured: Dimitri Yashvili and the tricolore:

COWARD HAD IT RIGHT - FRENCH HOLD US IN CONTEMPT

Eighty years ago the French were thrown out of the Five Nations and were blackballed for what the other four countries considered wholesale improprieties, such as dirty play and covert paying of their players.

So, from 1932 until the 1946 resumption after World War Two, no French side was permitted to sully the amateur gentlemanliness of the men from Twickenham, Lansdowne, Murrayfield and Cardiff.

And no French engagements with the All Blacks, the Springboks and Wallabies either. Thus, in that 14 years of boycott the French were reduced to playing only the Germans on a regular basis.

It was, wasn't it, a classic instance of fin de siecle -- or the tail-end of a bicycle -- for the French at frosty Stade de France last weekend?

Like the icy reserve described by Harold Wilson in his dealings with General de Gaulle.

"I didn't find references by me to Waterloo and Trafalgar necessarily productive and he has been very tactful about the Battle of Hastings," said the late British Prime Minister.

But, a generation or so later and how things change.

The French, the whipping boys of the 1930s, are now the rulers of the game.

Bernard Lapasset is the chairman of the International Rugby Board, a neat bit of Sarkozy-style diplomacy ousting the popular favourite, former England captain Bill Beaumont.

Eviction process
It was England, back on Easter Monday, 1931, who played the final match of the time in the Stade Colombes, losing to France and then taking a leading role in persuading the other three, Wales, Scotland and Ireland to join the eviction process.

Ireland's game against the French in that 1931 campaign was a loss in Paris by a try (three points back then) to nil. That Irish team contained such notables as Eugene Davy and Mark Sugden at half-back, Paul Murray, Eddie Lightfoot and Jack Arigho in the three-quarters and forwards Jammie Clinch, Noel Murphy senior, Jack Siggins and Victor Pike.

Pike, incidentally was one of 11 children of a Tipperary clergyman; when he'd finished rugby with the French and the rest, went on to become a bishop.

The following year of 1932, with no French involvement, the Irish won the championship.

I suppose most of us will admit the French are the best side in Europe and really would have won the World Cup but for some peculiar refereeing.

But do they really care what we think of them?

Was Noel Coward on the ball when he coined the song "But there is always something fishy about the French/ Whether prince or politician/We've a sinister suspicion/ That behind their savoir-faire/ They share/ A common contempt/ For every mother's son of us"?

As for Italy next week, financial problems have meant that only two professional clubs exist now, Treviso and Aironi; the rest have returned to amateur rugby.

Still things are improving and if they only unearthed a few good backs to compliment their tough pack, they would not be easy meat any more.