Why the gagging tactics over the Kiribati Independent? 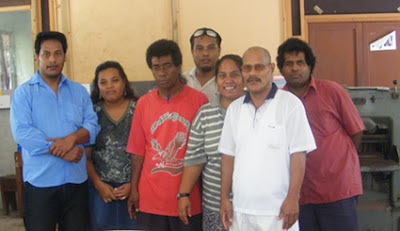 WHY IS the Communications Ministry in Tarawa dragging its feet over registration for the Kiribati Independent newspaper? Five months waiting for registration and lots of confused messages in the process. Perhaps the answer is simple. Café Pacific understands the new newspaper with its Auckland-based online edition is a bit of a political embarrassment for President Anote Tong’s government.

Twice the new newspaper has been ordered to stop publication since December while officials dither over the formalities under the Newspaper Registration Act. 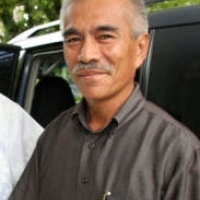 In March, the Kiribati Independent published stories featuring the reputed “richest woman in Kiribati”, New Zealander Joyce Lieven and her alleged relationship with the government. Businesswoman Joyce Lieven is daughter of the late NZ businessman Norman Lieven and reportedly a “close friend” of the ruling party and President Tong (pictured).

One story focused on a donation of AUD$24,000 to Joyce Lieven’s Mauri Festival last December during the presidential campaign. Donations are normally given to not-for-profit groups but the Mauri Festival it is not an NGO, it was reportedly a Lieven business venture.

In March, the Kiribati Independent reported about a 2010 government contract worth AUD$80,000 awarded to Lieven’s brother to build a copra shelter in Teraina Island in the Line and Phoenix group. The newspaper reported that “there was no copra shelter and the contract money had been used up”, said KI publisher and editor Taberannang Korauaba (pictured above with Maria Printers staff). 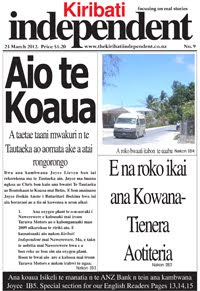 President Tong reportedly threatened to sue the newspaper over allegations about a AUD$1 million  junior secondary schools transport contract involving Joyce Lieven, claims denied by the national leader. A lawsuit hasn’t eventuated, but the Communications Ministry has again stalled over registering the newspaper and ordered it to stop publishing. Read more on the KI website:


TARAWA – Sunday, 20 May 2012 – The Ministry of Communications has ordered, for the second time, Kiribati Independent (KI) newspaper to cease publication immediately.
The latest instruction was received on Friday, 18 May 2012. Ruatu Titaake says the ministry has received affidavits from the publisher and printer. But he says:  “This never meant to allow you to publish KI newspaper straight away while your application for registration is still being processed.”
Ruatu says the publisher should have aware of the provisions in the Newspaper Registration Act that all newspaper publishers should be properly registered before making any publication.
“In accordance with those provisions, you have been instructed to cease the publication of Kiribati Independent (KI) and to follow the proper procedure for KI registration. Despite this instruction, you have published several KI newspapers without proper authority and continue to do so until your last issue on 4 May 2012.”
With your continual ignorance to the procedure, I regret to inform you that the Ministry still not recognise the publication and advise the publisher again to cease the publication of KI immediately and to await proper registration.
Publisher and editor, Taberannang Korauaba, who lives in New Zealand, says there is a lot of confusion here. “The law requires us to deposit our affidavits, we have done that.” Then they asked us about the stamp of a New Zealand solicitor, now they instructed us to cease publication.”
“There is hidden agenda and political motive in this instruction,” he says.
In December 2011, the ministry advised the publisher to wait while his application to register was processed. The lawyer acting on KI’s behalf, advised the publisher there was no need to wait for their decision.
The lawyer said the publisher, editor and printer were required by law to deposit their affidavits. The newspaper can publish once these affidavits have been deposited.
Kiribati Independent will seek the advice of its lawyer on this latest instruction.

In one message to the Communications Ministry on May 18, Korauaba asked: “[Do] you want Kiribati Independent to wait while its application is being processed or don't you want the paper to publish at all for hidden and political reasons?”

For the ministry, Ruata Titaake (for the Communications Secretary) replied on May 21: “You may or may not intend to publish for political reasons but our intention is to encourage all our local publishers to obey and respect our own laws that govern all citizens of Kiribati.”