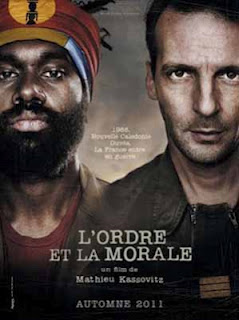 WHEN THE headlines hit France in April 1988 about the latest saga in “les évènements” down under in New Caledonia, filmmaker Mathieu Kassovitz was just 18. He remembers the gritty images of the Gossanna cave siege on television.

Indigenous Kanaks had massacred a quartet of gendarmes with machetes and shotguns and taken 27 others hostage.

There were also false reports of alleged decapitations and rape on Ouvéa in the remote Loyalty Islands.

But 13 years ago, Kassovitz’s father handed him the League of Human Rights report on the cave siege and he read the chilling real story for the first time.

A French military force of some 300 had been deployed in a retaliatory “invasion” of the island and the report detailed atrocities and summary executions that had left 19 Kanak hostage-takers dead in a dawn assault on 5 May 1988.

Kassovitz (La Haîne and Café au Lait) noted then how an elite police counter-terrorism unit negotiator, Captain Philippe Legorjus of the CIGN, was a central character in the disturbing events.

“I knew then there was the material for a wonderful movie and the script was virtually written,” Kassovitz recalled in a Femail interview. “The dramatic structure was in the report of those 10 days.”

Many obstacles
On his first trip to Ouvéa to explore the possibility of making the movie, it seemed many obstacles could block getting such a project off the ground.

“Ten years had passed but people were still withdrawn into their grief. The subject was tabu. There had been no closure,” he says.

“There was a lot of religious and political in-fighting within the Kanak community.”

A decade on and 25 film scripts later, against all the odds and being forced to make the film on the French Polynesian island of Anaa instead of Ouvéa, a courageous 136min testimony to the Kanak struggle and search for justice has been finally achieved.

The film was released in France last November with the title L’Order et La Morale – a play on words from the title of the Legorjus autobiography, La Morale et l’Action, and on a statement by the hated Minister of Overseas Territories Bernard Pons, who said rather cynically: “Sometimes some deaths are necessary to uphold order and morality.”

Last night, the gripping docudrama was screened for the first time at the New Zealand International Film Festival – under the English-language title Rebellion, which loses the nuances of the French name.

But the film was never shown in New Caledonia on general release in the largest cinema chain. The Pacific territory's French operator refused to screen it.

Smaller cinemas played the film to packed audiences, both Kanak and French.

Inspirational performances
The movie succeeds with the inspirational and credible performances of both director Kassovitz as the frustrated but professional lead character Legorjus – who tried hard to seek a peaceful solution to the hostage crisis – and the Kanak pro-independence militant leader Alphonse Dianou, played superbly by his cousin Iabe Lapacas, aged only six at the time of the tragedy.

Negotiator Legorjus – who is also taken captive – and Dianou ironically form a trusting bond of fraternity and understanding and the French officer is released in a bid to broker a deal.

But tension builds as the film covers the 10 days of negotiations until the expediency of the power struggle between rightwing Prime Minister Jacques Chirac and socialist President François Mitterrand in Paris over the imminent outcome of the presidential elections takes over. Mitterrand calls for negotiations – but in reality orders the full catastrophe assault on the cave to free the hostages.

He wins the election.

Other Kanak prisoners were simply killed in cold blood.

And the Kanak community feel betrayed by both Legorjus and the pro-independence FLNKS. This sense of betrayal ultimately led to the assassination of charismatic FLNKS leader Jean-Marie Tjibaou and his deputy Yéiwene Yéiwene a year later in a ceremony marking the anniversary of the martyrs.

History lesson
Pastor Djubelly Wea, whose character features in the film giving Legorjus a Kanak history lesson while manacled to a coconut tree, was the assassin. He never forgave the FLNKS leadership for failing to negotiate on their behalf. (Although the FLNKS villain portrayed in the film is Franck Wahuzue).

Wea (played by relative Macki Wea) in turn was gunned down by Tjibaou’s bodyguard.

Having reported on the Kanak independence struggle for several years, watching Rebellion was an emotional rollercoaster for me. (In fact, I shared a hotel room in Manila at a “peace brigade” conference with Wea just months before the assassination).

Gossanna cave was tabu – and the film portrays traditional “custom” and beliefs very evocatively. In Kanak tradition, a promise made face-to-face is never broken.

Legorjus promised that the militants that they would live, a pledge that his superiors sabotaged for political capital.

I don’t believe the militants ever intended to harm their captives – they were simply negotiating leverage after things went wrong in the Fayaoué hostage-taking. In fact, as portrayed in the film, the hostages were about to be freed anyway.

At the time, I wrote an account in my book Blood on their Banner – the blood being that symbolised by the Kanak flag as being shed by the martyrs of more than a century of French rule.