Manning film strips away the secrecy around the Zaoui 'espionage' case

BEHIND THE SHROUD, Selwyn Manning's long awaited documentary about "intelligence, espionage and counter-terrorism", is now available on DVD and public screenings are being planned. The Pacific Media Centre plans a showing early next year. The 105min documentary film is investigative, participatory, independent and "gritty in style".

It examines the Ahmed Zaoui case. The film analyses why in 2007, after years of the New Zealand government stating the refugee Algerian theologian and teacher to be a risk to the nation's security, the Inspector-General of Intelligence and Security, Justice Paul Neazor, found in Zaoui's favour and set him free.

As New Zealand filmmaker and journalist Manning says, the documentary "unearths information that has been cloaked in secrecy". The research and preliminary version of the documentary was produced while the filmmaker was completing his Masters in Communication Studies at in collaboration with the Pacific Media Centre at AUT University. It also provides insights into French intelligence policy and the Pacific. Manning is lead co-author of the book I Almost Forgot About the Moon about the Zaoui case: 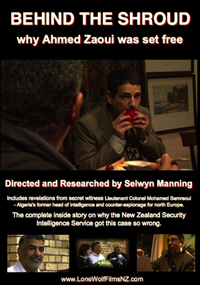 Behind The Shroud takes the viewer on a journey into that shadowy world of spies and espionage, and resolves the mystery of the Zaoui case through interviews with key players in the great game, including two secret witnesses who each testified at the Inspector-General's hearings into the Zaoui case in Auckland in 2007.

The two secret witnesses are: Lieutenant Colonel Mohamed Samraoui, the Algerian regime's former head of intelligence and counter-espionage based in north Europe; and Professor George Joffe, an academic from Oxford and Cambridge universities - a renowned expert on north Africa affairs. Both men now speak publicly for the first time about how and why Zaoui was framed by the Algerian regime.

Mohamed Samraoui is a protagonist of sorts and is presented as the officer tasked by his superiors to create a cloak of disinformation around Zaoui. He outlines why as an officer of the DRS (Algeria's secret intelligence service) he "disempowered" Zaoui and other members of Algeria's opposition political parties so as to render them ineffective threats to the military regime.Behind The Shroud also presents other experts who offer exclusive accounts, each giving a unique view on how the Zaoui case has become a precedence-setting case-study into whether it is proper for governments to rely on intelligence information in judicial process and practice.

Their testimony confronts unanswered questions that have lingered since late 2007 and explains why the New Zealand government suddenly set Zaoui free, inviting Zaoui and his family to enjoy their liberty as legitimate refugees in New Zealand.

The documentary concludes with a thought-provoking critique of New Zealand's intelligence apparatus and paves the way for a debate into how New Zealand can move to ensure the Ahmed Zaoui case is not repeated.

Behind The Shroud is being distributed for selected film festival release.