NICE to see Fiji sisters Sherita and Sheenal Sharma, who have been the maestros of the Wansolwara journalism newspaper at the University of the South Pacific this year, being so innovative about their skills. They have made a showcase of their work on their Sharma Productions Facebook page. There has been a lot of interest in their inspirational video Bangladesh's Supermum about the life of a young Indo-Fijian widow. That's "Bangladesh" as in the squatter settlement Nanuku in the capital Suva, not the country. This is what they say about the programme:


A 10-minute video of a widowed mum teaching at a school for the blind, and surviving in a squatter settlement in Fiji's capital, Suva. The settlement known as Nanuku ... is one of many that have sprung up in the greater Suva area. The story of a woman who struggles to live in a two-bedroom house, with her parents, not accepted by her in-laws as well as earning very little and having to work multiple jobs, Anshoo is an inspiration to the many women who live in poverty-stricken parts of Fiji.

This is development journalism - and good storytelling - at work. Congratulations Sherita and Sheenal! In fact, double congratulations for Sherita because she has just won the Gold Medal for the top USP journalism student for 2012.

Café Pacific also takes the opportunity to applaud the journalism students for reviving Wansolwara Online. Not yet quite the finished product, but it is just good to be back in cyberspace after being offline since March 2007. The website follows an award-winning pedigree. Back in the 2000, the Wansolwara website (then known as Pacific Journalism Online, incorporating Wansolwara), won the international JEAA awards for Best Online and Best Publication (any media) for its coverage of the George Speight coup. In other words, the best produced by any journalism school in Australia, New Zealand and the Asia-Pacific region. 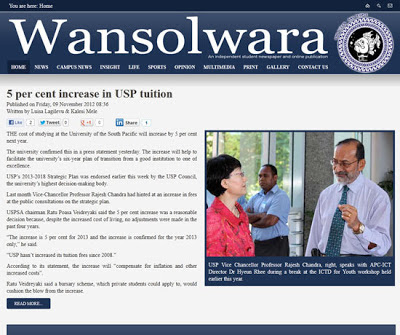