Thanks to Pacific Media Watch:

July 10 marked the 28th anniversary of the French attack, which Professor Robie wrote about in his 1986 book Eyes of Fire and also Blood on their Banner on Pacific independence struggles in 1989.

"The whole attack was outrageous in the first instance. It's just inconceivable that an attack like that could have been launched against a major nation in the world, a peaceful nation," Dr Robie said.

"It's bad enough that they did that, but then the French government at the time also blackmailed New Zealand over trade."

Dr Robie was on the Rainbow Warrior voyage more more than two months as a journalist, but had left the ship three nights before it was bombed in Auckland's Waitemata Harbour. 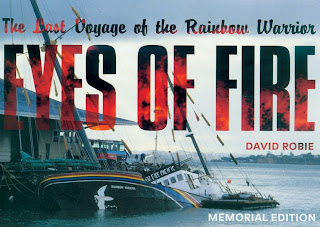 'Mad' characters
In the phone interview from Indonesia, Dr Robie also explained that the Rainbow Warrior attack was not an isolated incident, but part of France's repressive Pacific political strategy at the time.

"As a journalist, I was reporting on the French neo-colonialist policies in the region, and happening at the same time you had an insurrection by indigenous Kanaks in New Caledonia demanding independence.

"And then you also had strong groups in French Polynesia also demanding for independence.

"And then you had assassinations in New Caledonia. One of the big [independence] leaders Éloi Machoro was assassinated in 1986.

"Then you also had the Ouvea cave massacre when 19 indigenous Kanaks were slaughtered in a terrible massacre in 1988 ... in political expediency at the time of presidential elections.

"All these things were going on, so you had these mad, paranoid sort of characters, I think within the French Secret Service and also within high levels of the political machinery.

"This paranoid mentality allowed these things to happen, particularly the attack on the Rainbow Warrior," Dr Robie said.