By James Thomas of Today Tonight

Billions of dollars in foreign aid going to PNG are being siphoned off by corrupt politicians and officials - and into Aussie companies.

The Australian property market, casinos, and the banks are playing host to millions of dollars in foreign aid allegedly being siphoned off by corrupt Papua New Guinea politicians and officials.

The money trail ends up in Australian companies, caught up in the multi-million dollar corruption ring.

Sam Koim, head of PNG's Anti-Corruption Task Force, is on a mission to lift the lid on billions of dollars of dirty money leaving PNG to be laundered in Australia.

About 59 people have already been charged with corruption offences in PNG, and it is alleged much of their illegally obtained money is spent in Cairns.

Koim says Australia contributes about $500 million to the PNG budget, and 40 percent of that budget is lost to corruption annually. 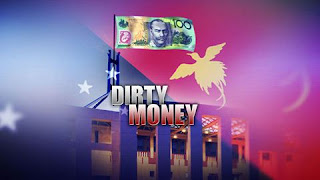 "The dirty money is then moved from the Australian banks to Australian-based businesses, and then from the companies the money disappears," Koim said.

Koim said his anti-corruption task force is particularly interested in a transaction of $45 million belonging to the people of PNG into an Australian bank.

In July 2009, $45 million was deposited at the Lismore Branch of the Commonwealth Bank into an account owned by a company named Woodlawn Capital.

PNG claims
The PNG government claims the money was stolen.

The money trail begins in PNG with the government-owned Motor Vehicle Insurance Limited (MVIL). They owned shares in the Bank of South Pacific, which they used to take out a loan to raise roughly $45 million.

The money was then transferred to Australia and into the account of Woodlawn Capital at the Commonwealth Bank in Lismore.

According to the PNG government this all took place without the approval of the board that authorises these transactions, The Independent Public Business Corporation (IPBC). Without the IPBC's approval the transaction is illegal in PNG.

The newly elected PNG government are accusing the authors of the deal, and the recipients of the cash in Australia as being thieves, engaged in an elaborate scheme to funnel money offshore.

Professor Sharman is working closely with the PNG government to track the missing millions.

Claims denied
"The suspicions from the PNG government tend to focus on the responsible minister during that time," Professor Sharman said.

Arthur Somare has a $700,000 home in Cairns, and claims he has no knowledge of the transaction.

"I don't condone illegal transactions, and I don't have oversight over something that was illegal," Somare said.

He points the finger at Australia's Commonwealth Bank in Lismore, who received the $45 million.

"There's such a thing called due diligence, and I would have expected that during a DD process, that someone would have given us a call," he added.

The Commonwealth Bank said in a statement that they were unable to comment on this specific transaction, but said that: "We can confirm generally, that the bank systematically reviews transactions including those of significant value."

The PNG government has alleged that Arthur Somare is the beneficiary of corruption, and have asked him to account for the $45 million that allegedly went missing on his watch.

Minister suspended
Arthur Somare was suspended from office relating to 105 allegations of misconduct in office in 2011.

The PNG government recalled the $45 million from Woodlawn Capital's directors Tim McNamara and Tim Breen, accusing them of stealing the proceeds of an illegal deal.

However, Breen believes that they are the victims of corruption, not the perpetrators.

He claims that he and his partner had no idea that the funds came from an illegal transaction, and that everything they did at their end was above board.

"We haven't laundered any money, all the money is accounted for, all money was held on behalf of the client," Breen said.

"It is a matter for the court. It's a contractual dispute, and we're being bullied by a much bigger party on the other side."

Australia's Anti-Money Laundering Agency, AUSTRAC, has stated before the Senate in 2008 that corruptly obtained money that gets laundered in Australia are a serious problem that they face, particularly those coming from PNG and the Pacific Region.

Joint statement from the Attorney-General and Minister for Justice and Home Affairs:


The government is concerned about the allegations raised on the Today Tonight program.

The Minister for Justice and Home Affairs has spoken directly with AFP Commissioner Tony Negus about the allegations, and has sought further advice on the details of the claims.

The Attorney-General has tasked the Secretary of his Department and the Vice-President of the Financial Action Taskforce, Roger Wilkins, to assist the Australian Transaction Reports and Analysis Centre in examining these specific allegations. Mr Wilkins will advise the Government on any further action required following the election.

This was an excellent investigative report.

My brothers and sisters should also go on asking why Bouganvillie Chairmen Daveona is conducting business with Australian Citizen Patrick Salera through the newly created ‘PNG Capital Limited’…. Patrick Salera is bankrupt in his home of Austrlia and not aloowed to do bussines in his country so why he allows to come here for logging and satalite projects?

This was a good TV report.

My brothers and sisters should also go on asking why the Bouganvillie Chaimen Daveona is conducting business with Patrick Salera through the newly created ‘PNG Capital Limited’…. Patrick Salera is bankrupt in his home of Austrlia and not alowed to do bussines in his country so why he allows to come here for logging and china satalite projects?