A Fiji democratic mandate for the coup leader – what now for the media?

IN THE END, it was no real surprise. For 2006 coup leader Josaia Voreqe Bainimarama, who retired recently as the military strongman with the rank of rear admiral, it was a foregone conclusion that he would emerge as the triumphant victor in Fiji’s first general election in almost eight years.

Just as it was inevitable in 1992, when the original coupster - who staged two coups in the same year, 1987 -  Brigadier-General Sitiveni Rabuka made the transition from military backed prime minister to civilian leader.

A major difference is that Rabuka was elected in 1992 on an indigenous supremacy platform of “Fiji for Fijians” while Bainimarama’s Fiji First party is pledged to a multiracial “Fiji for all Fijians”.

The hope is that Bainimarama’s authoritarian streak will gradually mellow and he will come to recognise as an elected leader the critical importance of a civil society discourse with a strong non-government organisation sector and an independent Fourth Estate.

The media was once a proud and feisty part of Fiji democracy. It can achieve that credible status again.

Fred Wesley, editor-in-chief of Fiji’s oldest and still most influential newspaper, The Fiji Times, founded in Levuka in 1869, said the election was not a surprise.

Commenting in an editorial about the “will of the people”, he wrote the majority of Fijians believed Bainimarama offered them hope:

'Leap into new era'
“Clearly the masses know what they want  … an endorsement by the voters of Mr Bainimarama's popularity and his party's policies …," he wrote.

“We are poised to take a leap into a new era. And that in itself is good for Fiji. What we have before us is a doorway to greater things.”

There were similar sentiments in Repúblika, the magazine that has set a new benchmark for independent journalism in Fiji.

"What do the results mean for Fiji? A clear majority of the population has embraced Prime Minister Voreqe Bainimarama’s vision and ideals for Fiji, rejecting discrimination and the 'politics of the past' to give him and his party a democratic mandate after nearly eight years of military-led rule," wrote editor Ricardo Morris.

If there had been any doubt about the winner of this week’s election, it vanished almost a fortnight ago with the release of 45 captive Fijian peacekeepers seized by the rebel Syrian Islamist group al-Nusra Front on August 28 and held hostage in a southern Syrian hideout for two weeks.

The freed captives were greeted as heroes. But Bainimarama was also perceived as a hero over the behind-the-scenes negotiations.

Whatever the truth of a US$20 million ransom by the Qatari government, as claimed by some credible Israeli news media, to have them freed, the coup leader was perceived as the man of the hour. 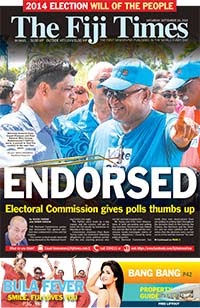 His undoubted popularity at home, in contrast to the “hated dictator” image constantly projected for years by a handful of rabid bloggers - with the exception of Victor Lal's investigative FijiLeaks - and influential but self-interested journalists, was reflected in his huge personal mandate in the election.

Bainimarama mustered some 202,459 votes (with counting not quite complete) – more than four times the total for his chief rival, SODELPA leader Ro Teimumu Kepa (49,485), and more than 70 percent of his own party’s total. But the political machine was manipulated in his favour.

With 59.2 percent of the total vote, his Fiji First party claimed 32 seats in the new 50-seat Parliament,  in contrast to SODELPA (15) and the National Federation Party (3).


His sometimes contemptuous attitude towards the media was revealed in a campaign incident, captured on video, when New Zealand journalist Amanda Gillies of TV3 had her microphone swiped out of her hand with a disdainful slap. It was as if Bainimarama was swatting an over-sized mosquito in response to the question: “Do you think there will be another coup?”

But most New Zealand reporting about the Fiji election was rather shallow, with the exception of  two student journalists from AUT University on internship with Repúblika and Wansolwara and another in Auckland filing for Pacific Scoop, and Tagata Pasifika’s polished and empathetic John Pulu (also an AUT graduate).

Ro Teimumu tends to be rather haughty too when it comes to the media, except for with those who appear likely to support her campaign.

The irony is that the one party leader who does have an enlightened approach on the media, economist Professor Biman Prasad, who resigned from his University of the South Pacific post to lead the National Federation Party and who squeaked in with three seats, was rarely engaged with on the press freedom issue by journalists.

Dr Prasad, who co-authored an outspoken book entitled Media and Democracy in 2008, spoke out strongly in at least one of his campaign speeches about press freedom.

He made the point that while the State Privileges Decree and the Media Industry Development Decree remained in place, the 2014 – or even future general elections – could not be genuinely free and fair.

“The media decree with its heavy fines and penalties make it impossible for the country’s journalists to cover issues openly and without fear. It makes it impossible for us to project our messages to our people,” he says.

'Harsh restrictions'
“I commend our journalists who in spite of these harsh restrictions are doing their best to keep our citizens informed. To these journalists, let me say a big vinaka vakalevu. The stakes have rarely been higher and the weight on your shoulders so heavy. The nation owes you its profound gratitude as you take real risks to help project our messages to Fiji citizens.”

He calls on media organisations and editors to provide the “right environment” for their reporters so that they can do their jobs responsibly. This is a vitally important role in Fiji’s transition to democracy.

To paraphrase a message from a regional media and elections training programme, Dr Prasad says, "Freedom is when people can speak. Democracy is when government listens and the media is the messenger.”

“My party doesn’t fear the media. If the Bainimarama government has nothing to hide and if it has the moral courage to do the right thing, it should lift media restrictions with immediate effect.”

Prasad also pledges to work towards upholding the “fundamental right” for citizens, businesses, media and NGOs to access information about government decisions affecting lives.  This would involve trying to get a draft Freedom of Information (Right to Information) Bill that has been languishing on the back burner for years in Fiji.

“We no longer live in the dark ages where governments habitually kept secret, public information such as salaries paid to our leaders, and allowances they are paid on foreign junkets.”

Many media freedom organisations, such as the IFEX collective in its “What hope for human rights?” article, and human rights groups have raised issues around freedom of the press in Fiji - especially last week when death threats were reportedly issued on social media against two women journalists in Fiji, one an indigenous Fijian working for the state-owned Fiji Broadcasting Corporation, and the other an ethnic Indo-Fijian on the staff of the Fiji Sun.

The Paris-based Reporters Sans Frontières (RSF) and AUT University’s Pacific Media Centre are two that have. In a joint submission to the United Nations Human Rights Council before its Fiji Periodic Review next month, the two organisations have called for a repeal of the draconian Media Decree and the introduction of an Freedom of Information law.

In this year’s RSF World Press Freedom Index, Fiji has improved its ranking to 107th out of 179 countries – a rise of 10 places over 2013. The major reason for this improvement was the adoption of the new Constitution on 6 September 2013, described as “coup proof” by supporters and flawed by critics, and the promise “free and fair” elections by the end of this month.

Now the elections have actually been held, Fiji can probably expect another improvement for next year’s ranking.

“There has been considerable hope among news media and civil society groups that the general election will open the door to a free media climate, one that has been lacking since the military coup in December 2006,” said RSF in its submission to the Human Rights Council earlier this year.

“Over the past few months there has been a marked improvement in public debate and news media have been relatively more robust in terms of published political comment and debate, particularly in news columns and in letters to the editor.”

And this improvement has continued into the election campaign.

The combined RSF and PMC submission examines the state of the media in Fiji today and calls on the elected Bainimarama government to: