THE PARIS-based media freedom organisation Reporters Sans Frontières has called on global media editors to publish Charlie Hebdo’s political and religious cartoons as a response to the shocking “black Wednesday” attack on the weekly satirical magazine.

Renowned internationally for its scathing and hilarious cartoons, Charlie Hebdo has always put its fight for freedom of information first, says RSF.

And now its staff has been “decimated by an unspeakable act of violence that targets the entire press. Journalism as a whole is in mourning".

Many social media posters are asking is this a new “freedom of speech war”. Supporters are declaring "Je suis Charlie" - "I am Charlie" in vigils of solidarity.

“But,” warns RSF, “freedom of information cannot shrink in the face of barbarity and yield to blackmail by those who assail our democracy and what our republic stands for. In the name of all those who have fallen in the defence of fundamental values, let us continue Charlie Hebdo’s fight for free information. 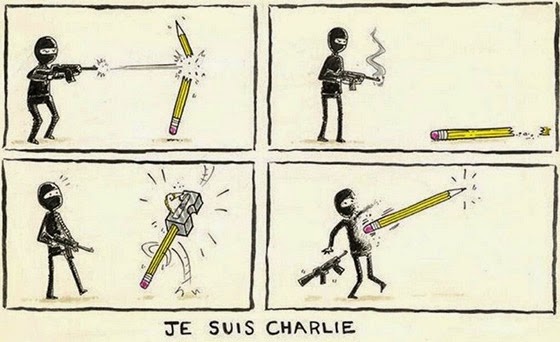 “By making this appeal, RSF is expressing its deepest solidarity with Charlie Hebdo.”

Pacific Media Watch, a regional watchdog project of the Pacific Media Centre, has joined the Paris-based Reporters Without Borders (RSF) and the European Federation of Journalists (EFJ)  in condemning the massacre of cartoonists and journalists as a “barbaric act”.

"Attacking a newsroom with lethal weapons is the kind of violence we see in Iraq, Somalia and Pakistan,” said RSF secretary-general Christophe Deloire, speaking at the scene of the attack.

“Could we have expected such horror in France? It was a nightmare that became reality. This terrorist attack is a black day in the history of France.”

French news organisations reported that masked men armed with automatic weapons and a grenade launcher stormed the Charlie Hebdo office, in the ninth district in central Paris. The suspects – now reportedly identified by French police - fled and are still on the run.

French President Francois Hollande visited the scene within an hour of the attack and he described it as an act of "exceptional barbarism".

But he added: "No barbaric act will ever kill freedom of the press". He said France’s security alert level had been raised after the shooting.

Charlie Hebdo had been under police protection since 2011 when the magazine was firebombed after publishing a cartoon depicting the Prophet Mohammed.

Two policemen armed with pistols guarding the magazine office were both reportedly shot dead in the attack.


“We weep for the victims of today’s horrific attack on Charlie Hebdo, who include the cartoonists Charb [who was also the chief editor], Cabu, Tignous and Wolinski and Bernard Maris.

“Our thoughts are with these colleagues and friends, who have been taken from us by hatred. There can be no worse attack on media freedom, and all other freedoms, than to storm into a media outlet and shoot on sight.

“We will continue our fight for freedom and tolerance in the face of this barbarity. We will do it for them and for all those who have fallen in defence of such fundamental values as freedom of information.

“We offer our heartfelt condolences to the families and friends of the victims of this terrorist attack.”

In Atlantic magazine, Dashiell Bennett offered this backgrounder which said in part:


Journalists around the world are expressing solidarity with the victims of a terrorist attack on a French magazine in Paris, echoing Charlie Hebdo's relentless support of free speech in a controversy that's nearly a decade old.

In 2005, a Danish newspaper Jyllands-Posten published a page of 12 cartoons, drawn by various artists, depicting the Prophet Mohammed. Some were innocuous pictures of unnamed Islamic figures, while others were mocking or outright critical of Islam. Many Muslims angrily objected, accusing the paper of blasphemy, and subsequent protests in early 2006 turned violent.

Some of the worst incidents took place in Nigeria, where the cartoons became the pretext for a wave of sectarian violence that killed more than 100 people, most of them Muslim.

Many other publications republished the cartoons out of solidarity to Jyllands-Posten. One of them was Charlie Hebdo, a long-running satirical magazine that had its roots in the French counterculture of the 1960s. From the very beginning, the publication had a habit of taking on French political figures and the media, often running afoul of public sensibilities and the government.

It ceased publication in the 1980s, but was resurrected under new leadership in 1992.

Following the Danish cartoon controversy, the magazine continued to make Muslim extremism a frequent target. (Although Christian and Jewish leaders were often subject to mockery as well.)

The Charlie Hebdo massacre was the deadliest in France since the 1954-1962 Algerian war which spilled over into guerrilla warfare and terror attacks in Paris. This ultimately forced France into granting Algeria independence.

At least two of the suspects believed to be responsible for the attack are French-Algerians, named by police as brothers Cherif Kouachi, 32, and 34-year-old Said who were still “likely armed and dangerous”.

A third suspect, 18-year-old Hamyd Mourad, has reportedly surrendered to police in a panic after seeing his name widely circulated on social media.