CAFÉ PACIFIC offers a bit of nostalgia. In just over a couple of months, New Zealand and the Pacific will be marking the 30th anniversary of the bombing of the Rainbow Warrior in an outrageous case of state terrorism by French secret agents in Auckland's Waitemata Harbour on 10 July 1985.

Dutch photojournalist Fernando Pereira was killed as part of the double-bomb plot. An unwarranted attack on a peaceful environmental ship.

The word is that there will soon be a fresh new (fifth) edition of David Robie's book Eyes of Fire. Out of a dozen books or so to surface out of the l'Affaire Greenpeace, David's was the only one written by somebody actually on board. There will be new content and new pictures.

The publishers, Little Island Press, also have a surprise package planned. More about that later.


Word is that skipper Peter Willcox, the only person to captain all three Rainbow Warriors, also has a book on the way.

Due out next year, it will tell the story of the dramatic Arctic 30 protest against an oil drilling platform in the Bering Sea and their arrest by the Russians, and other adventures including the Auckland bombing.

Back in August 2006, a year after the launch of edition four of EOF (there were also editions in Britain and the US), David was in Vanuatu to run a media course and took the opportunity of presenting a copy to then Prime Minister Ham Lini, younger brother of founding PM Father Walter Lini.

Walter wrote the forward to Eyes of Fire and this is what his daughter Lora filed for the Vanuatu Daily Post at the time (since then she has had a falling out with her uncle Ham because she is a strong advocate for the West Papuan cause, just like her father):


NEW ZEALAND award-winning journalist and author has presented a copy of the latest edition of his book Eyes of Fire: The Last Voyage of the Rainbow Warrior to the [then] Prime Minister of Vanuatu, Ham Lini.

"In 1985 the late Father Walter Lini ... was another who welcomed those of us on the Rainbow Warrior as kindred spirits in the struggle for a Nuclear-Free Pacific," wrote Bunny McDiarmid in the preface of the memorial edition.

"Lini in the 1980s was an inspirational leader and wanted to see an independent and nuclear-free Tahiti," continued McDiarmid.

Walter Lini wrote in the foreword: "David Robie was the only journalist on board the Rainbow Warrior when she left Port Vila for Auckland where she was put out of action by the DGSE agents.

"He was on board for 11 weeks, covering the evacuation of the fallout-ravaged people of Rongelap Atoll in the Marshall Islands.

"Thus he is well placed to provide us with this vivid account of the Rainbow Warrior's last voyage and the connection of Rongelap and Moruroa with colonialism in the Pacific."

Dr Robie also took the opportunity to acknowledge the contributions of some of his former students to the Vanuatu media industry. 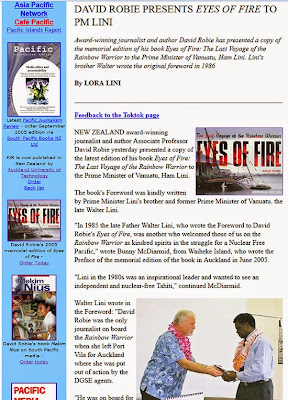