Pacific j-schools and the sad fate of UPNG 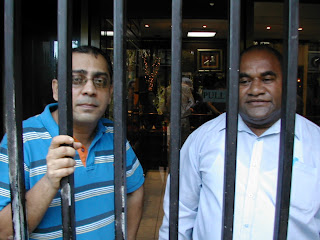 Hard to believe, but the South Pacific has just had its first regional journalism school
workshop - 33 years after the first j-school was established. The University of Papua New Guinea led the way in 1975 - the heady year of independence - with a j-school established with NZ aid by the late Ross Stevens. Sadly, Ross would have turned in his grave if he saw the state of UPNG's j-school today. In his time (1975-77) on the Waigani campus, the teaching was in a creative "dungeon" in the bowels of the Michael Somare library. Today, journalism is housed in the relatively recent Ulli Beier building - in an air conditioned multi-purpose lab - but with no sign of actual journalism. Five e-Macs lacking a printer 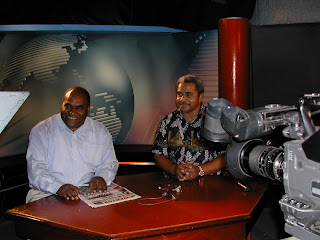 and a network. Hardly the stuff of a newsroom. Gone is any sign of the history and tradition of what was once the finest journalism school newspaper in the Pacific - Uni Tavur (first Pacific j-paper to win the Ossie award for newspapers in 1995, competing against Australian and NZ publications). That success was during my era at UPNG when I negotiated with the Post-Courier to print the paper every fortnight for 12 editions a year. Thanks OP for your great support in those days!

What is a journalism school without its own press and broadcast programmes? It's hard to imagine that UPNG has 100 j-students plus these days. What do they do? And what is their employment ratio? There are simply not enough jobs. Still, I was pleased to see many of my former students doing so well in the media, people like Titi Gabi, news director at PNGFM Ltd, and Jackie Kapigeno, news editor at The National, and her deputy, Christine Pakakota. Well done team! Good to see Freddy Hernandez still going strong in The National newsroom - check out his letters from Moresby. And a delight to see Jada and team at Wantok.

Now let's not get too nostalgic about PNG. Back to UNESCO and Abel Caine - they deserve a big bouquet for getting this much belated workshop off the ground. And already the second such workshop is in their sights for next August at the PINA convention in Vanuatu. Although some j-schools are more fortunate than others in the region, many of the issues about facilities and resources (including human) are familiar to everybody. And a sharing of issues and a draft plan for the future is encouraging for Pacific j-education. In my book, the only downside of the workshop was the failure of the new polytechnic j-schools to get their act together (apart from Fiji Institute of Technology, which was well-represented by Elia Vesikula) and be represented. Invitations to Samoa, Solomon Islands, Tonga and Vanuatu were wasted. I wonder what possessed AusAID to lash out money on establishing these new schools when the existing j-programmes are so under-resourced as it is. There are simply not enough facilities and human resources to go around all the Pacific schools. The University of the South Pacific with the only regional regional j-programme has the capacity to continue running courses for everybody, providing the industry backs USP to the hilt. Its postgraduate programme is also developing quite nicely. The sheer scale of PNG means both Divine Word (especially) and UPNG have much to offer. But UPNG needs a huge injection of assistance to get it back to anywhere near its former status as the leading j-school in the region (see my book Mekim Nius for the history). Maybe UNESCO could offer a volunteer for a two-year project as well as resources?

Pictured: Top: "Behind bars" - symbolic of post-coup Fiji today. But this is now a sign of the security times in PNG. USP's Shailendra Singh and FIT's Elia Vesikula offer us the caged look at a downtown Moresby jewellery store. Above: Earlier in the day, Vesikula and PINA's Matai Akauola left us in no doubt with Fiji TV's ownership of EmTV when they took over the news readers desk for a laugh! Photos: David Robie