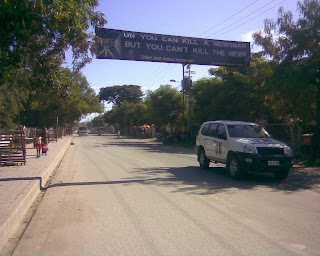 Leading Timorese photojournalist Jose Belo, a stringer for Australia's SBS Dateline and director of Tempo Semanál Weekly, is fed up with the intimidation and harassment from UN authorities in Dili. He doesn't believe it's the brief of UNMIT to heavy journos and try to extract information from them with jail threats and suchlike. In fact, he is so annoyed that he has sent a protest letter to UNMIT with copies to President Jose Ramos Horta, PM Xanana Gusmão, a bunch of parliamentary and judicial heavyweights, journalist colleagues in East Timor and the media freedom groups Committee to Protect Journalists (New York) and Reporters Sans Frontières (Paris). According to his letter, quoted by Pacific Media Watch at the weekend:
On April 18, 2008, I was approached by United Nations police investigators who said they wanted to interview me in relation to stories I have worked on involving the rebel leaders Major Alfredo Reinado and Lieutenant Gastao Salsinha.
They asked me to sign a document agreeing to be a witness in the ongoing investigations into February 11th attack [on President Horta]. I declined to sign the document and was told if I did not appear for an interview at 9.30am on April 22nd 2008, an arrest warrant would be issued.
Jose said the UN investigators wanted to ask him about an exchange of fire involving Reinado at Fatuahi in 2006, which he had filmed for Dateline, and also a phone interview with Salsinha from the previous week, also for Dateline. Reinado was killed in the February attacks against President Horta and Prime Minister Gusmão.
That work is already in the public [domain]. I refer the investigators to those programmes for all the information they need. I did attend the police station at the appointed time, with lawyers - to comply with the Timor-Leste laws and follow the rules of journalism.
My fear was that they wished to seize my phone contacts and my film archives and interrogate me about my sources.
Belo decided to attend the interview but ... it really
upset me because my personal feeling was that it was a kind of pressure or intimidation [on] the press.
And it makes me start to think that East Timor’s media should not be intimidated by UN-endorsed threats of arrest or possible jail for failing to disclose information.
The UN should be a model for human rights. It should not attempt to violate media freedoms.
I was one journalist. The investigation team was many. I should not have to do their jobs for them.
Pictured: A protest banner in Dili against UNMIT on World Media Freedom Day (May 3) - "UN: You can kill a newsman, but you can't kill the news"

Unconscionable conduct by the United Nations. Another stain - among many - on the UN's record in East Timor.