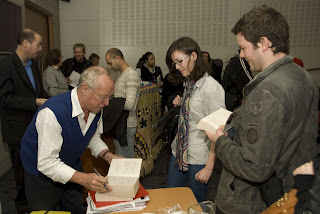 TRUE believers? A host of them trooped in for the Robert Fisk lecture/ student news exchange organised by the Pacific Media Centre at AUT University. Where were the sceptics?

Apart from the core of AUT student journalists, radio and TV students and staff who had ditched their mid-semester break to come along to be challenged, inspired - and even entertained - by Fisky, there were academics, civil rights activists and many others. Robert Fisk was in NZ for a promotional tour for his latest book, The Age of the Warrior.

The AUT booking was thanks to Amnesty International. The lecture theatre (chosen for its intimacy and which normally seats 160 people) was packed out with at least another 40 or 50 people for the hour-long lunch date. Just as well there were no health and safety hawks drifting around. Fisk was at his inspirational best - it's quite extraordinary to see a journalist having such a cult following. Many editors were sighted in the audience, including the NZ Herald's former editor-in-chief Gavin Ellis, who chose the AUT rather than his own University of Auckland bash, which was charging $25 a head for a Fisk Amnesty fundraiser.

Fisk had plenty of gems on offer for his audience including anecdotes about his contempt for how the internet has become "a system of hate". Scolding media for not reporting the full truth about the Middle East, he also had some advice for the neophite journos that wouldn't go down too well with either the digital natives or the digital grandstanders: 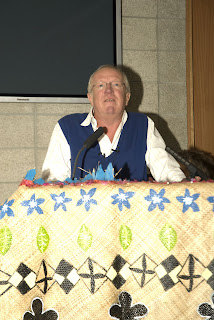