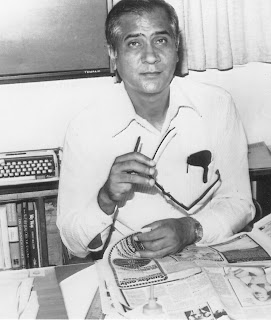 ONE of the satisfying presentations of the recent FAME awards in Fiji was the long-deserved Lifetime Achievement Award media recognition for Vijendra Kumar, first local editor of The Fiji Times. He held that post for about 16 years from 1975, bridging the mellow Mara years during the height of the placid "Pacific way" era and through Rabuka's two military coups. He finally resigned and headed for Brisbane to join his family.

Kumar wasn't there in Suva to collect his gong, but many spoke warmly of his contribution to Fiji media. A few years ago, he spoke candidly to doctoral candidate Anthony Mason who was working on a thesis examining the Fiji coups and the Australian media. Among his reflections published in Pacific Journalism Review was a scathing assessment of international media covering Fiji:

They had absolutely no idea. Few of them knew very much about Fiji, except that it was a South Sea island where they went for a holiday. Very few of them knew much about the political system or the names of the leaders. So it was a surprise for us, and I think it was a big learning experience for the Australian and New Zealand journalists. The NZ journalists had a little more knowledge about Fiji than the Australians, because NZ had closer contacts. Fiji got a lot of coverage on New Zealand radio and in NZ newspapers even before the [1987 Rabuka] coup. But Australian newspapers never reported anything that happened in Fiji, as far as I remember, unless it was something sensational.

Has anything changed that much? Picture: Mason/Pacific Journalism Review
Michael Field has taken a pathetic cheap shot over at Discombobulated Bubu (and on his own website) while attempting to put a sanitising spin on the recent Broadcasting Standards Authority ruling against him. It seems his own reading skills are rather limited. He claims: "... given that organisations like NZPA, the Fiji media and AUT's David Robie cannot be bothered to read the BSA ruling, and prefer to take the Fiji government assessment of the situation, I will try to at least put some context into it all." In my case, he is totally wrong. He is referring to a Pacific Media Watch monitoring item reporting his own news organisation Fairfax Media's website Stuff account of the adjudication. Had he bothered to check, he would have also found that PMW published the full adjudication on its database (but he knew this anyway as it had been pointed out to him later). This is plain mischief-making and disinformation on his part - wasn't "accuracy" at the very core of the BSA complaint over Field in the first place? My only previous comment on this issue was right here on Café Pacific.
Posted by café pacific at 12:25 AM