Public right to know - from Possum to the Pumpkin

MAKE sure you get hold of the latest Pacific Journalism Review, due out next week. With the theme "The Public Right to Know - Reporting Futures", this edition has a host of interesting articles. Among them is Chris Nash's fascinating insights into political blogger Possum Pollytics and the critical impact he had on the reportage of last November's Australian federal election. (Check out his new blog). Too bad we don't seem to have a blogger in his league in New Zealand as we approach our own election on November 8. Tony Maniaty has an article analysing the impact of the evolutionary technologies and breathtaking media change on television war reporting:

The fall of free-to-air ratings continues apace, and, with it, the vast resources needed to deploy large teams into the battlefield to mount comprehensive audience-gripping coverage. This relentless quest for real-time war drama has much to answer for, shifting increasingly precious resources away from more nuanced and informative 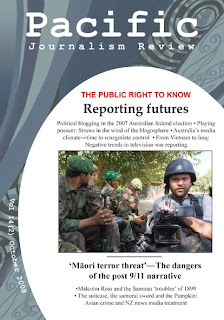 In Maniaty's view, "big" media is struggling to sustain "comprehensive coverage". He reckons the "smaller-scale, independent output of video journalists" is becoming the new trend-setter.

In other content in PJR, Robbie Robertson reviews two new challenging books on the Pacific (and Asia) media, which should have the flacks talking, while Sarah Baker and Jeanie Benson offer a refreshing take on NZ media reporting of Asian crime - "The suitcase, the samurai sword and the Pumpkin". The edition is jointly published with the Australian Centre for Independent Journalism (ACIJ).