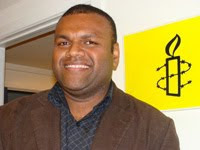 HOW IRONICAL that in the same week that Amnesty International unveiled its damning report on human rights violations since the Fiji post Easter putsch, a number of Indo-Fijian journalists and commentators sounded off “enough is enough” warnings on alleged biased reporting by the NZ media about Fiji. According to Pacific researcher Apolosi Bose’s report on Fiji (he himself is indigenous Fijian, which is a curious departure from AI policy seeking nationally neutral researchers for any in-country probing):

Security forces in Fiji have become increasingly menacing towards people who oppose the regime, including journalists and human rights defenders. Fiji is now caught in a downward spiral of human rights violations and repression.

Only concerted international pressure can break this cycle.

China was singled out as the most serious culprit for ignoring human rights while propping up the Bainimarama regime with aid. This was just a week after Fiji had been fully suspended from the Commonwealth.

However, while the 48-page Amnesty report, Fiji, Paradise Lost, described a litany of repression and censorship against the media (and a host of other human rights violations against the public at large) and arbitrary arrests of some 20 journalists under the notorious Public Emergency Regulations (PER) since April 10, other journalists and the media were singling out Australia and New Zealand as the main culprits for failed policies over Fiji.

According to an editorial in the upstart - but increasingly impressive - new Auckland-based Indo-Fijian newspaper Indian Weekender, the West’s attitude to Fiji “has changed the region’s geopolitics”. The isolationalist policy driven largely by “belligerent” Australia and New Zealand has created the power and influence vacuum that China is now happily filling. Wrote editor Dev Nadkarni, a longtime resident of Fiji as a former journalism school coordinator:

Fiji is too important to be trivialised with the insensitive approach that New Zealand and Australia have had toward it over the past two and a half years. It has always been the gateway to the South Pacific and will remain so.

Any attempts to shift it to a neighbouring country like Samoa – which Samoa’s leadership has repeatedly sought – is wishful thinking and well nigh impossible for reasons of its inferior infrastructure, costs and sheer logistics, which New Zealand and Australia simply cannot afford.

The geopolitics of the Pacific has been in slow ferment for about two decades now with Asian powers like China, Taiwan and Japan playing increasingly important roles in its development. It will now begin to accelerate. And the West’s handling of the Fiji situation since early 2007 has already proved to be the catalyst.

Writing in the same paper, academic and political commentator Subhash Appana attacked the “hostility, speculation and demonisation” of Fiji in the Western media, particularly Australia and New Zealand. He claimed most of the NZ reporting was being done by biased journalists who had either “run foul of the coup regime" or had a “hard done by acquaintance”. Before citing a range of alleged biased reporting examples by Television New Zealand, including by Pacific correspondent Barbara Dreaver, Appana wrote:

Their takes on Fiji have been … tainted. This article analyses blinkered reporting on Fiji in New Zealand, and attempts to place on the public platter a more dispassionate view on the Pacific’s pariah state.

He was also highly critical of how most reporters in NZ kept playing a race card in their stories.

Continued reference to Indians and how they ‘support’ this coup is not only lazy, it is unprofessional. If the Fiji Indian succumbs to the human weakness of feeling perverse pleasure at the forced education of fence-sitters and coup-supporters, should he be blamed for it? … The media [in NZ] would do well to rethink the need for balance in reporting.

The previous week, the established rival Indian Newslink editor Venkat Raman returned from a seven-day trip to Fiji and published a 24-page “special report”, including a contributed article by self-declared interim Prime Minister Voreqe Bainimarama. Raman was also scathing about biased reporting in the NZ media.

But the strongest comments came from former Fiji Daily Post publisher Thakur Ranjit Singh in his characteristic feisty style. In a commentary for Pacific.Scoop railing against a press that “did not understand Fiji democracy”, he claimed:

When journalists from Samoa and Tonga have a field day in either the Pacific Freedom Forum or other media outlets in shedding tears for a Fiji democracy that failed to deliver social justice, there was no Indo-Fijian journalist in sight to rebut the nonsense coming out from Polynesian countries which themselves are bereft of the democracy they want for Fiji.

To Subhash Appana, Venkat Raman and Thakur Singh, Franky is acting like a deranged bull since 2006 because of people like you and others who had the false impression that Franky will execute what you wanted. You know that will never happe! Stop wasting your time trying to blame others! If you really like Voreqe why don't leave Aotearoa and go back to Fiji.

Yes very ironical! Which goes to show what's been said all along, a majority of the Indian community in NZ support the Bainimarama coup as can be seen in commentators like Dev, Thakur, Venkat Raman of the Indian Newslink and Radio Tarana.

And of course they would dispute the coverage by the NZ and Aust media given their stand.

I would believe the Amnesty Report, not the Indians.

These last two posts display the kind of incipient racism at the heart of the Fiji problem. First. there's the suggestion that Frank Bainimarama is a puppet of Indo-Fijians and then the bald reference to "the Indians" being less believable than an Amnesty report that happens to have been written, strangely, by an indigenous Fijian. Never mind that a string of non-Indian journalists and academics have expressed sympathy for Bainimarama's position. Blame the Indians! I want to know who this Apolosi character is and why his report is so lamentably short of specifics when he alleges mass human rights violations in Fiji. The hyperbole was more worthy of Solivakasama and other blog drivel than a compelling case against the regime based on fact. I want to see examples, not unsupported assertions.