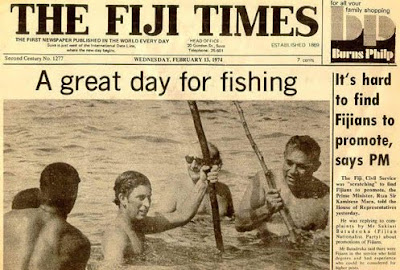 THE DOOMSDAY brigade is quickly at it again with its tenacious state gagging scenario at the Fiji Times. Media voices trot out the same tired old media freedom clichés about the fate of the ex-News Ltd newspaper that did so much to dig its own grave. Café Pacific prefers to keep an open mind and see what Motibhai’s new publisher, Dallas Swinstead, can produce. Give him time. A breath of fresh air and a strategic rethink of how to go about being an effective newspaper faced with the reality of a military-backed authoritarian regime. A real challenge.

Murdoch's previous News Ltd managers at the FT failed to get to grips with reality in Fiji. The combination of ownership by a Fiji company headed by astute businessman "Mac" Patel, who had long experience at the newspaper as a director, and a trusted publisher, who already had a track record as an innovative chief executive at the helm for four years – albeit during more relaxed times – could yet turn out to be a winner.

And if the Fiji Times succeeds in negotiating the media decree minefield and staying afloat with its long-lost integrity restored, then chalk that up as a media freedom success. If the newspaper learns from its past divisive mistakes, then even better. This outcome is vastly preferable to the News Ltd debacle that brought the newspaper to the brink of closure. Netani Rika and Margaret Wise are synonymous with that partisan era of questionable ethics. Rika "sacrificed" his job for the good of the company. But the rot had actually set in long before the George Speight attempted coup in May 2000.

The International Federation of Journalists voiced concern for the future of “critical and independent media” in Fiji, with secretary-general Aidan White saying: “The regime-imposed pressures on the Fiji Times risk silencing anyone who dares to stand up to defend independent media for the people of Fiji.” The Pacific Freedom Forum is concerned about “increasing confusion” as spin and silence reigns with a new Fiji clampdown. The regime friendly rival Fiji Sun reported the Fiji Times newsroom in a turmoil. Veteran columnist Seona Smiles says the resignation of Rika and the uncertainty over deputy editor Sophie Foster is a “great loss” to the newspaper.

For people to have to leave a job that they are both competent at, for political reasons, is always difficult. And both Netani Rika and Sophie Foster remained very staunch and true to journalistic ethics, throughout the recent period of political crisis.

However, in spite of all the hype and spin by both the regime and some media freedom opportunists, when a new broom is brought into a newspaper with change of ownership, it is normal for a change of editor and top editorial management. Café Pacific publisher David Robie flagged an editorial reshuffle in an interview with Radio NZ International’s Mediawatch programme last Sunday. Pacific Media Watch's Alex Perrottet reported the interview, quoting Dr Robie as saying that the Fiji Times was “going back to the future”:

As the dust settles, they may well look at another editor who would probably be more in tune with what Dallas Swinstead is going to try and do …

He is likely to take a more diplomatic approach to the regime than his immediate predecessors. But I certainly don’t think he is going to be kowtowing to the regime. He has made some quite strong comments since he has been appointed.

But whether Fred Wesley is the right choice as acting editor-in-chief is another matter. Swinstead himself confirmed that he would be trying to “rebuild the relationship” with the regime in an interview with Fiji Broadcasting Corporation news director Stan Simpson:

Yes, we are changing direction. Having watched News Ltd perish in this country, there’s no sense in committing suicide – even with a local-owned replacement. There is no doubt that The Fiji Times cannot be antagonistic to the government. What on earth does it prove? But we will ask questions in a fair and balanced way because we will be helping to bring the people to the government.

Picture: How the old Fiji Times looked in 1974 - before Dallas Swinstead revamped the paper during his first stint as publisher for four years, 1976-1980. Photo: Fiji Times

Finally, some balance to the chorus of doom and gloom about the Fiji Times. A really excellent treatise, thank you. And for the first time, someone has really hit the nail on the head about the underlying problem at the Fiji Times under News Limited. And that was a total failure of management by a succession of publishers sent from Sydney with no idea of how to operate in a local context. Instead of bringing Netani Rika into line after a series of editorial disasters, successive News Limited publishers indulged him and encouraged the notion of a brilliant and courageous local editor standing up for media freedom. He seems to have been lionised at every turn without his adoring fans ever actually picking up a copy of the Fiji Times. Had they done so, they'd have found a paper wallowing in mediocrity and often barely literate. For those of us who read the bloody thing, the general deterioration of the FT during Rika's tutelage has been highly depressing. Far from being a beacon of journalistic excellence, as these idiots keep making out, page after page simply reinforced the notion that the paper, like most things in Fiji, was going backwards. As if that wasn't enough, Rika would simply order that some things not be covered at all because they didn't suit his political agenda. These included major national developments with a crucial bearing on the lives of ordinary people. But because they involved the regime, they'd be simply ignored. It beggars belief that a global media company like News Limited permitted such an indulgence for so long. And how extraordinary that Rupert Murdoch's empire has been able to manage successive world leaders of the calibre of Thatcher and Reagan but couldn't manage Frank Bainimarama. Murdoch himself should personally investigate what happened in Fiji. If he did, he'd realise what a massive cock-up the whole sorry business has been. It's very encouraging to hear Dallas Swinstead start to strip away the emperor's clothes and call it like it is.
A newspaper exists for its readers, not some rogue editor, and in a country like Fiji, has to work with those in power whoever they might be. First and foremost, Dallas, please give us something decent to read. The days of Len Usher and Robert Keith-Reid may be long gone but we know good writing from trash. When I heard David Robie describe Swinstead's plans for the Fiji Times as "going back to the future" I could only think, thank God!

The reality of the Rika/Foster era at The Fiji Times is this:

1.Slow but sure decline in standards
2.Grammatical and spelling errors (including in headlines and captions) becoming commonplace
3.No understanding of basic subjudice/ contempt/defamation across Times newsroom (Breach of subjudice cost News Ltd $100k last year. When found to be abysmally lacking in professionalism, Fiji Times made pathetic attempts to turn this into a freedom of speech issue).
4.During Rika and Foster watch, Fiji Sun overtook Fiji Times as the biggest Saturday newspaper in Fiji (Fiji Sun had less resources but better leadership).
5.During Rika and Foster watch, News Limited lost ownership of Fiji.

How can people expect the new owners of the Times to continue employing these two?

It is NOT about media freedom.
It is about competency and ability.
But it suits PFF to twist this around.
PFF has to justify it existence, after all.
A classic case of riding the NGO gravy train
Much of the time PFF does not know what it is talking about and through its half-baked press releases, is propagating misleading information and giving people a status that they do not deserve, which my journalist friends tell me is a cardinal sin in journalism.

Compelling criticism of the Fiji Times, especially from the two anonymous commentators.

Your second commentator however goes too far when they suggest the Pacific Freedom Forum is seeking some kind of "gravy train" existence. As a PFF contributor, I would love to see evidence of either gravy or a train but so far, no sign of either.

In the first comment, the author refers to a "series of editorial disasters..."

If that was the case, then there should be historical evidence of complaints laid against Fiji Times, decisions by the Fiji media council, court and other decisions against the paper.

However, all we have to go on is a military enforced censorship regime, hardly convincing.

So this IS about media freedom.

I have previously raised criticism about media empires like that of Murdoch supporting business and corporate agendas that come at the cost of local communities. This is not a Fiji problem, this is a worldwide problem.

Yet this blog continues to assail individual journalists, like TV3's John Campbell, and "media freedom opportunists" as being responsible for much that ails journalism today.

So far, however, this blog has made only ONE reference to the worldwide journalism crisis - casting the term in disbelieving quotes - then passing quickly onto a topic unrelated to reality for the vast bulk of journalists - warzone safety.

Murdoch is an empire, yes, but a global empire. Until journalism commentators get their heads around this fact, they are guilty of the same crime they accuse others of - of not being in command of all the facts.