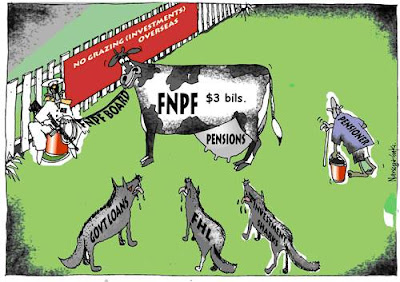 HOW BIZARRE. The Fiji censors have gagged a perfectly reasonable and well-argued article about how ordinary Fijians can help their much-maligned national pension fund. Almost two years ago, the University of the South Pacific economist and former MP Professor Wadan Narsey penned an article in The Fiji Times about the “circling coup wolves”, which were putting the Fiji National Provident Fund at risk. His accompanying cartoon depicted the FNPF as a cash cow laden with pensions with a bunch of wolves snapping at its hooves. (By law, some 16 percent of Fijians wages and salaries must be paid into the fund - savings amounting to F$2.5 billion and with assets on paper worth $3 billion). The introduction said:

contributors and pensioners should be concerned. Perhaps worried. Perhaps frightened. Because our FNPF life savings are under threat.

While outlining the threatening wolves and the potential harm they could cause the FNPF, he also pointed out the lack of representation for the country’s contributors and pensioners:

We the FNPF contributors who own the savings do not have a single direct representative on the FNPF board who can be accountable to us. Why don't we?

We remain quiet at our peril.

But this fresh article on Pacific Media Centre Online today has a far more positive tone, more in the vein of what Fijians can do for the country’s fund (to rescue it) rather than what the fund can do for them. A visionary recipe for development. Yet the regime’s censors gagged the article from a Fiji Times edition last week – they “took it away and didn’t return it”. Narsey says:

With a stagnating economy, FNPF revenues have been severely constrained. Few new jobs have been created and existing incomes have not grown; many loans are non-performing; returns on FNPF investments have been declining; and large amounts of capital values have been written off because of mismanagement.

But collectively, FNPF contributors and pensioners remain the largest group of spenders in the Fiji economy.

Here is the challenge: can FNPF contributors and pensioners direct their consumption expenditure towards FNPF investments, and change FNPF policies for the better?

And Narsey made a number of suggestions about how the fund can be restructured, provide fairer representation and also about strategic help. This was a very positive and constructive article. As the author notes:

Why would the Bainimarama regime ban this article from a daily newspaper? What greater damage is being done to our people’s welfare which the papers are stopped from reporting, every day? Why do we Fiji citizens continue to suffer this daily loss of our basic human right to freedom of expression, without even a whimper?