Libya is no Iraq – this revolution is the real deal 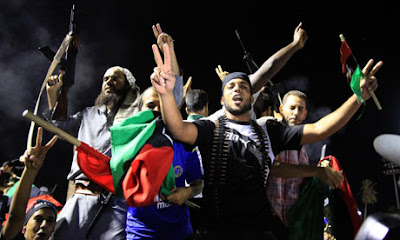 By Mohamed Salem via MediaMonitor

MUAMMAR GADDAFI and his sons are now on the run, fleeing from the Libyan people, yet already the doomsayers and prophets of disaster have lined up to tell the world it isn't worth it, that Libya is destined to go down the route of chaos and fragmentation. Libya will be another Iraq and Afghanistan, we are told.

They are wrong, because the post-conflict scenario in Libya differs from those two examples of failed Western intervention in several crucial aspects. Indeed if you study the indicators, Libya is poised to be the most complete and potentially most successful of any the Arab uprisings so far.

The roots of Iraq and Afghanistan's tragedy lie in the abrupt and imposed nature of change. It's easy to forget that Libya's organic and intense popular uprising preceded any international intervention. UN security council resolution 1973, which authorised the use of force to protect civilians, was only passed when it became clear that a massacre in the east was imminent. This is not Nato's revolution, not by a long way. The Libyan revolution remains very much the real deal.

The reason this matters is because it means no foreign power can now assert a moral right to meddle in Libya's future. Libya's destiny is now rightfully in the hands of its people, having been hijacked by Gaddafi and his cronies for almost 42 years. It also means the West must to a degree absolve itself of direct responsibility for what happens next in Libya and leave the planning to Libyans themselves.

The worst idea of all would be to send in foreign ground troops now, even under the peacekeeping banner. Not only would this be met with fierce opposition by the Libyan people, it would send the message that the West still feels that Arabs cannot be trusted to look after themselves.

Even without foreign bases on Libyan soil, some commentators have raised the spectre of a Ba'athist-style insurgency against the new Libyan government by regime loyalists. This prediction does not stand up to scrutiny either. The moment Gaddafi is captured or killed and his regime put to bed, there will be nothing left for his supporters to support.

There are no sectarian, ethnic or ideological cleavages to be exploited to foment unrest and violence. The onus is now on the Libyan people to show restraint and respect for the rule of law in dealing with regime officials and soldiers, and to refrain from vigilantism and retributive justice.

Mohamed Salem is the pen name of a British-Libyan journalist who writes for The Guardian.