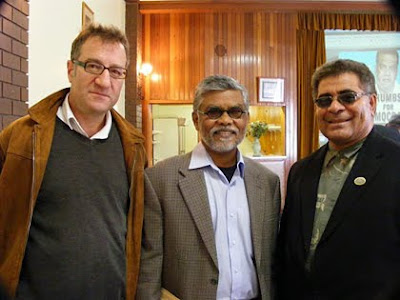 REGULAR readers of my Grubsheet blog will be aware of the occasional blows we trade with Jon Fraenkel – an academic who specialises in Melanesian affairs at the Australian National University. Well, here’s a chance to hear us go head-to-head on the ABC Radio National programme, National Interest. It’s a spirited debate on whether it’s in Australia’s national interest to maintain its policy of shunning the Bainimarama regime in Fiji to try to force it to hold an early election.

Dr Fraenkel is among the chief advocates of Australia and New Zealand continuing to refuse to engage with Bainimarama until he buckles. Grubsheet – on the other hand – argues that re-engagement is essential to try to influence events in Fiji and help Bainimarama keep his promise to hold elections in 2014. In this, Grubsheet has common cause with the likes of the Lowy Institute, which fears the strategic consequences of allowing Fiji to move ever closer to China, which has dramatically increased its presence in the Pacific.

Jon Fraenkel is part of a strong anti-regime cabal at the ANU, which includes the Indo-Fijian historian, Professor Brij Lal, and Frank Bainimarama’s former land forces commander, Colonel Jone Baledrokadroka. All three are active political players, despite – in the case of Fraenkel and Lal – allowing themselves to be portrayed as independent commentators in the regional media.

Dr Fraenkel is still to come up with any explanation of the circumstances of the photograph that Grubsheet published several weeks ago, showing him and Brij Lal at a Canberra gathering with Simione Kaitani, one of the principal figures of the 2000 George Speight coup. As listeners to the ABC program will hear, Fraenkel has no compunction in trying to smear Grubsheet as a “Bainimarama supporter” or a “supporter of the 2006 coup” when we’ve made it clear all along that our support is not for the dictator himself but his programme for a multiracial Fiji as opposed to the racism of the government he removed.

Yet here is Fraenkel in the company of a man – in Kaitani – who was a senior minister in that government, was at George Speight’s side throughout the events of 2000, has admitted publicly to committing sedition and insists that Fiji must always be led by indigenous Fijians.

We’ll leave listeners to make up their own minds as to who has the stronger argument.

Grubsheet: Heat and light on Fiji
Posted by café pacific at 3:36 PM