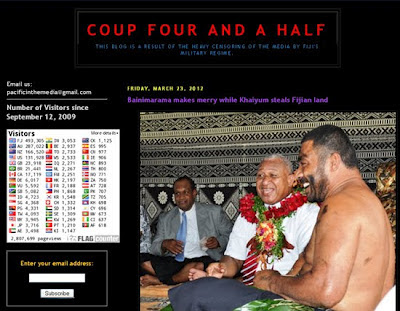 THERE are indications of panic in the anti-blog newsrooms. Despite their efforts to liken the Fiji dictatorship to the military dictatorship in Burma, there have been no protest marches or public immolestations. Ordinary Fijians seem to be going about their daily lives in normal ways.

From the perspective of the anti-blogs, things are moving too smoothly. The Constitution reform process has been generally well received. The media is publishing commments hostile to the "illegal" government by former politicians Qarase, Chaudhry and Beddoes , and even Rabuka has put his two-cents' worth in. The Methodist Church hierachy and the CCF have aired views critrical of government on the demise of the Great Council of Chiefs.

The pathway to the "illegal" elections is now more clearly illuminated. There seems little doubt that the United States - and Australia and NZ behind the scenes - have accepted the announced steps leading up to the 2014 election. And even the economy seems to be picking up.

What does this mean for the anti-blogs? They could change tack and try to steer events closer to how they wish. They could even change to genuine support, subject to certain conditions. But these strategies would not put the SDL back in power or ensure itaukei paramountcy, whatever that now means.

Nor would there be the perks, appointments and scholarships like there were in the good old days. So, as their chances of success diminish by the day, their best option is to take their disinformation to a new level.

"Unlike traditional propaganda techniques designed to engage emotional support, disinformation is designed to manipulate the audience at the rational level by either discrediting conflicting information or supporting false conclusions. A common disinformation tactic is to mix some truth and observation with false conclusions and lies, or to reveal part of the truth while presenting it as the whole (a limited hangout)."

Disinformation, of course, is not new to Coup4.5. Their stories from insider, leaked and "usually reliable sources" have long provided gossipy fodder for their more gullible readers. Remember the protest marches that never eventuated?: The military about to rebel ... The links to Al Queda and the Muslim takeover ... Bainimarama so ill he could not walk unsupported ... Aiyaz Sayed-Khaiyum's "arrest"... Bainimarama portrayed as Khaiyum's puppet (and unintelligent, untrustworthy, corrupt, incompetent and a liar, as FijiToday repeated only yesterday.)

The blog's latest posting (22/3/12) claims "on excellent authority that a trio [of the Chief Justice and lawyer sisters Nazhat and Shaista Shameem] has already drafted a guiding Constitution and held a secret meeting on New Years Day at the Macau Hotel in Nadi" to discuss the consultation process, the Civic Education Programme, and the composition of the Constituent Assembly. They also had learned "on excellent authority that as suspected, Yash Ghai was chosen by Bainimarama and Khaiyum to head their illegal consultation process because of his profile."

What's so hushhush and sinister about all this? A secret meeting in Nadi when they could have met more secretly in Suva — although, apparently, it took Coup4.5 from New Year's Day to find out? Three lawyers meeting to consider legal guidelines? Thoughts on who could make up the Constituent Assembly? The choice of an internationally respected lawyer to chair the Commission that would hear submissions prior to the meeting of the Assembly?

Does Coup4.5 seriously and honestly think the Constitution Process could happen without forward planning, that participants and agendas would miraculously fall into place, and a lot should be drawn for chairman? There is no story here. Perhaps that's why it took Coup4.5 from January 1 to tell it.

The day before (21/3/12) they published an equally incredulous, but far more embellished, story. This time it was a "leaked report" of a meeting of the Military Council to provide an "exit strategy for Frank Bainimarama cloaked in a new Constitution and the 2014 election." The meeting apparently considered a "paper titled Fiji's Road Map To Political Election 2014 (sent to Coupfourpointfive the day before the consultation process was announced more than two weeks ago on March 9)." But why it was not reported then they do not say.

However, we are told subsequent events (the abolition of the GCC, changes in the Provincial Councils, etc) make the report "too convincing to ignore." The meeting also discussed how Bainimarama could be "out maneuvered" [sic]! Huh! Exit strategy and outmanoeuvred? Submitting the report and the minutes of their meeting to paper would seem to be dangerous given their part of their plot to outmanoeuvre the Prime Minister. The paper (that may be read in full on the Coup4.5 site) really lets the cat out of the blog so I would expect the immediate dismissal of plotters Captain Natuva, Colonel Saumatua and Colonel Aziz on the grounds of disloyalty.

The paper listed seven strategies. Strategy 1 called for an immediate election, and a “People Constitution Forum" spearheaded by the 20 government departments. If this does not happen, Coup4.5's disinformation is exposed.

Strategy 2 called for the PM "to publicly announce this month he will stand for election" and form a new political party. His campaign will be led by "highly professional and political experts." All government departments will be "militarised" and soldiers will be his "campaign runners." Provincial Councils and civil servants will "follow orders." It's no secret the PM may stand for elections but if his election campaign is not as Coup4.5 describes, its disinformation is further exposed.

Stategy 3 would see no old political party stand for election, and a qualification test for all candidates. This is also possible. It has been talked about for some time, and no one would be surprised if the Constitution Assembly ruled along these lines.

I'll leave readers to read the rest, most of which I find unsurprising. Most "accusations" have been announced or anticipated already. It is only their interpretation that makes them seem sinister. But, as we now all know, "A common disinformation tactic is to mix some truth and observation with false conclusions and lies, or to reveal part of the truth while presenting it as the whole."

Expect much more of the same as time rolls on.

Retired professor emeritus Crosbie Walsh was founding director of development studies at the University of the South Pacific and publishes a Fiji analysis blog.