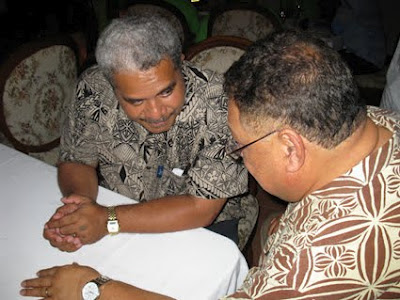 The picture of the conference ... PINA manager Matai Akauola and Taimi Media Network publisher Kalafi Moala having a quiet word about the future. Photo: David Robie

WHETHER it was the 21st birthday (as celebrated by the cake at a gala dinner) or 40th anniversary (as flagged by a former president in the opening speech notes), last week’s Fiji milestones for the Pacific Islands News Association (PINA) were notable achievements.

There was a convivial and relaxed atmosphere at the Pacific Harbour venue – in marked contrast to the tense last Pacific Media Summit in Port Vila two years ago.

And an optimistic mood about the future.

Instead of beating itself up over unresolved differences such as The Great Fiji Divide or the Tired Old Vanuatu Feud, PINA seems to be picking up the pieces and moving on.

A more inclusive atmosphere characterised this summit and the boycott threats fell flat.

The peacemaker was veteran Tongan publisher and media freedom campaigner Kalafi Moala, the only journalist to actually put his campaigning credentials on the line and be jailed for trumped up contempt of Parliament charges by his kingdom.

Moala has perhaps mellowed these days, but believes strongly that it is up to Pacific media “elders” to bury their differences and build on their common goals.

‘Go forward’ plea
As deputy chair of the rival Apia-based Pacific Islands Media Association (PasiMA), one of the key organisations to call for a last-minute boycott of the PINA summit, Moala made an impassioned plea – in his private capacity as publisher of the Taimi Media Network – to “go forward” in unity and diversity.

He advocated a need for a variety of organisations in the Pacific responding to specific briefs while perhaps one day being part of the PINA family “umbrella”.

In his speech during a panel discussion about “fragmentation” of Pacific media groups, he acknowledged PINA had always been a "quarrelsome family”.

He recalled how the PINA executive had in fact been split when he was jailed in 1996 and while several board members had actually supported his imprisonment, then president Monica Miller had backed him.

In Apia in 2003, when PINA and the former Pacific Islands Broadcasting Association (PIBA) were being merged, there had again been bitter in-fighting – “and the Bainimarama coup hadn’t even happened yet”.

Many delegates, particularly from Polynesia, wanted the PINA secretariat to move from Fiji to Samoa. Some PINA cynics saw this as a Polynesian and Melanesian split.

Hurtful snub
Moala said a delegation of 10 New Zealand-based Pacific Islanders had attended the PINA conference in Apia that year and were snubbed when they tried to become associate members.

“We were very hurt by that – after all we are all Pacific Islanders.”

There were also tensions in 2005 and again in Port Vila in 2009. “We never missed a chance to have a great quarrel about something,” Moala said.

In contrast, this year’s PINA summit “has been the best ever”.

Moala pointed out that any fragmentation that happened in Port Vila was not because of Fiji “but because of the issues that had been brewing for some time”.

He had expected the conference in Fiji to be the worst in view of the “troubled waters”.

Need to heal
“We need to heal and move forward. As long as we remain focused on Fiji alone, we’ll be blocked and there will be no going further.

PINA manager and training coordinator Matai Akauola noted how the summit had attracted several key outspoken critics of PINA and its refusal to move the secretariat from its “compromised” location - as seen by critics - in the capital of the Fiji military-backed regime. 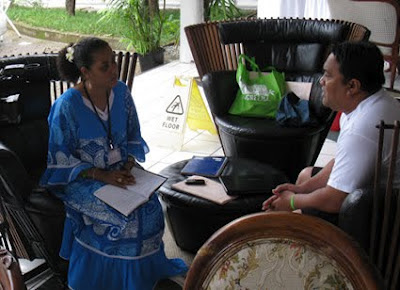 Samoan government newspaper Savali editor and PM’s press adviser Tupuola Terry Tavita (pictured above being interviewed by Radio Djiido's Magalie Tingal for a USP documentary on media freedom), for example, has been running a series of bitter attacks on the Fiji regime leader, Voreqe Bainimarama.

But he was also caught up in the spirit of conciliation. Tupuola proposed Apia as the venue for the next PINA Pacific summit for 2014.

Although the Samoan offer still has to meet a new template of host conference conditions – to avoid this year’s Cook Islands debacle – it was a popular prospect as the venue.

“This will be a very significant year, especially if we have the conference just after the Fiji elections – if they happen,” Tupuola said.

“This will set our future directions.”

New executive
Neither Moala and Tupuola were elected to the incoming PINA executive – their organisations are apparently not financial members – but they were significant players in critical discussions in a conference that dodged sensitive issues.

Moses Stevens of Vanuatu was reelected as president for a further two years and Auckland-based Niue Star publisher, Michael “Original” Jackson, was voted in as vice-president.

He described donor “red tape” as a new form of media control in the Pacific and this was a threat to press freedom in the region.

“We all know some of these donors often impose very strict guidelines on how we should use the resources they give.”

Fiji-born investigative journalist Graham Davis urged journalists in a panel addressing media credibility and public trust to “get it right. Shame those who don’t”.

“There’s an old saying in Fiji when someone behaves inappropriately – ‘oilei. No shame.’

“No one has to explain the dictionary meaning of shame – the painful feeling arising from being conscious that something dishonourable has happened,” he said.

“I think we need to rediscover the power of shame when it comes to violations of basic journalistic practice … to feel shame ourselves when they’re breached and to collectively shame others who do the breaching.

“Shame could and should have prevented the Fiji Times, during the [former elected PM Laisenia] Qarase years, from running a story calling for Indians in Fiji to be ‘thinned out’. It was a humiliating slap in the face for more than one third of the country – and offended a large proportion of Fiji Times reader of all races, many of whom haven’t forgotten.”

But he praised the “analytical pieces for us to ponder on” published in the independent blogs of professors David Robie (Café Pacific) and Croz Walsh (Fiji).

Former PINA president Johnson Honimae lamented that public trust had declined in some Pacific countries, but added that in spite of the challenge facing the media, he believed the industry was doing a “fair job”.

Access to hard-hitting programmes, such as Hard Talk on BBC World was uncompromising and probing and investigative journalism such as on the ABC’s Four Corners, had led to higher expectations by the Pacific Islands public for the local media to lift its game.

“When such investigative journalism is not dished out, our readers or viewers start to lose trust in us," Honimae told a panel on corruption.

He called for more Pacific countries to take the Cook Islands lead and introduce freedom of information legislation. The Fiji Sun took up his plea in an editorial.

Reporting corruption
“Many of the corrupt or illegal activities happening in the Pacific region continue to flourish because they are not reported,” said the Sun.

“Or when they are reported by the news media, vital information cannot be obtained.

“However, in saying that, we stress that this is not some special right for news media alone. It is a right for all people, including the news media.

“In this age of the fight against corruption and for better governance, it is also the right thing to do.”

Fiji regime head Bainimarama silenced his critics in the opening speech when he highlighted some embarrassing media home truths, challenging Pacific news groups to invest more in their journalists. There had never been a great investment, he scolded.

“But there needs to be one. Our journalists need to be well-informed. This is both the responsibility of the individual and organisations to ensure this.”

Bainimarama reminded publishers and owners many journalists were underpaid for their efforts and at times they were just “used, abused, untrained and unappreciated”.

“To have a media who [are] respected, whose analysis and opinion matter, reporters need to be nurtured,” Bainimarama said.

Election challenges
Pointing out that Fiji journalists faced a challenging time leading up to the 2014 elections, Bainimarama added: “Journalists and editors in this room in many ways represent the frontline of sharing what’s going on.”

But a spiral of silence enveloped many Fiji journalists and there was a pronounced reluctance by many local journalists, especially younger ones, to speak out on issues. The most outspoken were student journalists from the University of the South Pacific.

Fiji as an issue – or media freedom generally – rarely surfaced. The most sustained discussion about Fiji came when Fiji Times editor-in-chief Fred Wesley described how his newspaper had often been accused of being “anti-government of pro-government”.

He insisted the Fiji Times was neither – merely “carrying out its role as a newspaper”.

Wesley picked up on the regime’s call for all media to be “pro-Fiji” to define this from a Fiji Times perspective as ensuring that all voices, regardless of race or religion, are heard. 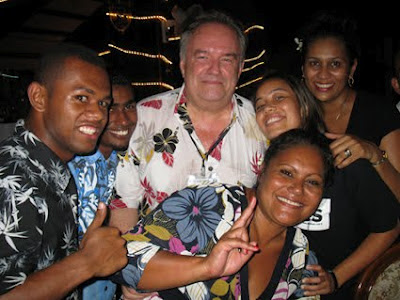 He also highlighted the challenges being faced by the company, especially the brain drain, since the Murdoch Australian-based News Ltd had sold the paper to the Motibhai Group in Fiji to comply with the Media Decree 10 per cent ceiling on foreign ownership.

But when Graham Davis (pictured above with his Fiji Times "fan club") asked Wesley to compare the editorial stance of the Fiji Times between the Murdoch and post-Murdoch eras, he clammed up and refused to comment.

The culture of silence rolls on.

Article and pictures by David Robie. This was the first PINA convention that Robie, a critic of PINA in the 1980s-90s, was actually invited to and to give a presentation. He was on the host organising committee in 1999 (Suva) and 1995 (Port Moresby).

Hmm... Tensions being ironed out, considering this obdurate view from Samoa Observer Editor?

What a contrast to Vanuatu where the meeting was hijacked by politicking, grandstanding, dramas, and walkouts. One Marc Neil-Jones vowed to boycott meeting, than tried to force his way in. Complained when PINA stood firm. Good on PINA back then for not giving in to this type of political manoeuvring and mischief-making. Marc’s newspaper paper was full of ‘balanced’ and ‘objective’ stories about how nasty PINA was and how he was a pitiful victim. Talk about using one’s paper to further one’s interest. And than lecture others about journalistic objectivity! No such drama in Fiji because the drama queens stayed away