A measured media brand of Pacific thoughtfulness, courage and balance

BARBARA DREAVER, on assignment for Television New Zealand somewhere in the Pacific, sent this book launching message for David Robie's Don’t Spoil My Beautiful Face last night. It was read out by Sandra Kailahi, chair of the Pacific Islands Media Association (PIMA), who launched the book:

Don’t Spoil My Beautiful Face takes its readers on a journey through a sometimes unfamiliar Pacific…and it’s a road you can’t help thinking you should be travelling on.

West Papua, Bougainville, Fiji – it’s every journalist’s conscience. If it’s not, then it should be.

The stories explored in Don’t Spoil My Beautiful Face are vitally important and delightfully varied.

From the Hagahai tribesman whose blood cells have been patented by the United States to the struggles of Tonga’s media over the years with the public’s right to know under threat.
David Robie has been at the forefront of Pacific journalism for decades bringing his brand of measured thoughtfulness, courage and balance.

His account of reporting in the Philippines on the “Forgotten Victims of a Silent War 1991” is chilling. Equally so “Terror in Timor” and the self-censorship of mainstream media reporting on it.

And lest we think that was in the past, look no further than West Papua - a brutal modern day example of a story that may as well be virtually non-existent. 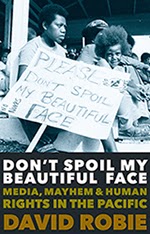 David Robie’s book reads like the man – there’s no fancy bells and whistles. It’s a stripped back and honest look at a region facing many challenges.

Don’t Spoil My Beautiful Face is not only a valuable tool for budding journalists, it’s essential reading for anyone who cares about the Pacific.

I am privileged to know David Robie. He is a great colleague but also a mentor who has been unfailingly supportive to me working in this region I love. I was very proud to be asked to launch this book –  but it was a risky move given I am often out of the country.

Sadly, that has proven to be the case here.

But I will conclude by saying this: David Robie, a leading advocate for media freedom and quality journalism, has yet again proven he is a brilliant author.