Death of our civil rights 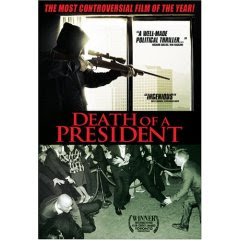 Anybody who saw the UK film Death of a President in the Auckland International Film Festival this week wouldn't have been surprised by the harrowing consequences of the so-called "war on terror" on civil rights and our fundamental freedoms as we lurch closer to the totalitarian systems we are supposedly being defended against. Gabriel Range's restrospective docudrama (based on the fictitious assassination of George W. Bush in Chicago in October 2007) is a brilliant - and controversial - portayal of the abyss we have been plunged into. Our fundamental concept of innocent until proven guilty is suspended when it comes to Muslim suspects. In that context and in the light of the Kafkaesque detention of Mohamed Haneef in Oz, note this ABC news item yesterday - and now Dr Haneef, as reported in the NZ Herald, has been freed with no case to answer! And the Oz authorities get away with the outrageous arrest without so much as an apology:
ListMail: ABC News
Saturday July 21, 2007
(For more news visit ABC News Online at http://www.abc.net.au/news)

*Haneef predicament 'every Muslim's fear'*
A Muslim civil rights advocate says the handling of the case of the
Gold Coast doctor Mohamed Haneef has confirmed the Muslim community's
worst fears.
Haneef is facing charges of recklessly providing support to a terrorist
organisation involved in the recent UK attempted car bombings.
In Brisbane last Saturday, the court was told that Haneef's SIM card
was found in the car that was driven into Glasgow airport.
But the ABC has been told by sources in the UK and Australia that the
SIM card was first seized by police eight hours later, when his cousin
Sabeel Ahmed was arrested in Liverpool.
Dr Waleed Kadous from the Australian Muslim Civil Rights Advocacy
Network says the fears felt by Muslims date back to the introduction of
the counter-terrorism legislation last year.
Dr Kadous says the Haneef case has left many thinking "there but for
the grace of God go I".
"[It was] every Muslim's fear that this could happen to him," he said.
"They can imagine being in the same situation as Haneef was in, that
they left a SIM card with a relative before leaving country and then
something happens a year later.
"They can imagine borrowing money from someone and paying the loan
back, these are not unusual things."
Greg Ansley in the NZ Herald wrote about the red faces over the collapse of "evidence" against Haneef.
Posted by café pacific at 6:21 PM

> *Law Council slams Govt in Hicks report*
>
> Convicted terrorism supporter David Hicks might have sunk from public
> view as he serves out his sentence in an Adelaide jail, but the Law
> Council's final report into his treatment at US prison Guantanamo Bay
> in Cuba is taking on new resonance in light of the case of Gold
> Coast-based doctor Mohamed Haneef.
>
> The Law Council has just released the report in Melbourne, and its
> contents are likely to widen the growing divide that has opened
> between the Federal Government and the legal fraternity over the
> treatment of terror suspects.
>
> It is nothing that has not been said before. But in his new report,
> Melbourne barrister Lex Lasry QC puts on the permanent record the
> criticisms he has made all along of the proceedings brought against
> David Hicks.
>
> "The idea of the report is to provide some kind of public record of
> the detail of what happened," he said.
>
> "But the conclusions that I think I announced a couple of times during
> interviews at the time - that the process was flawed and that the
> Australian Government was to be criticised for supporting it - > remain."
>
> Mr Lasry describes Hicks's trial and sentencing before the US military
> commission as a charade that only served to corrode the rule of law.
>
> He says the Australian Government has never explained why it accepted
> the commission process as "full and fair".
>
> And Mr Lasry suggests the Government might be hoping the pressure to
> do so will subside now that Hicks is back in Australia and will soon
> be a free man.
>
> "I don't imagine the Government will take much notice of my criticisms
> because there seem to be a number of them," he said.
>
> "But I'm not really worried about what they think; I'm more concerned
> about what the community thinks about the Government having supported
> this process when it was so obviously unfair, as at one stage in the
> process the US Supreme Court concluded."
>
> Citizens' rights
>
> Mr Lasry went to Guantanamo Bay in March this year as an independent
> observer for the Law Council of Australia.
>
> The Law Council's president, Tim Bugg, says the report is a salient
> reminder.
>
> "The report is very important because it's a reminder of the
> Australian Government's failure to protect one of its citizens'
> fundamental rights," he said.
>
> Mr Bugg says the Hicks case is even more important in light of the
> Haneef case, which he says is an echo of what happened to Hicks.
>
> "Clearly Dr Haneef is going to be subjected to a far better process
> because he's in the Australian justice system," he said.
>
> "But nonetheless the Hicks case highlighted that a citizen's rights
> were simply jettisoned because of political considerations, rather
> than considerations of principle.
>
> "The Law Council is very concerned that there is more than a hint of
> the same occurring in relation to Dr Haneef."
>
> Labor's 'weak stance'
>
> Today Mr Lasry not only criticised the Federal Government, but also
> said the Federal Opposition has failed to play a strong enough role in
> scrutinising the Government.
>
> "We presently have a Federal Opposition that is not prepared to get
> involved in these discussions, it would seem, on issues of national
> security," he said.
>
> "I know they say they'll debate Iraq, but they don't seem to be
> willing to debate important principles that can affect ordinary people
> caught up in a suspected terrorism situation."
>
> Mr Lasry says lawyers have had to step in to provide some balance in
> the public debate.
>
> "What lawyers are doing is not trying to promote themselves at their
> clients' expense but rather let people know what's at stake, and I
> think that's an important thing to be doing," he said.
>
> "So of course we're criticised, because it's the opposite of what the
> Government would want to happen, I suspect."
>
> Mr Lasry was once a member of the Labor Party but says is dismayed at
> the party's weak stance on the Haneef case.
>
> "The principle is too important to just say, 'Well, we take the
> Government at its word,'" he said.
>
> "I just think in the present circumstances you wouldn't do that - I
> don't.
>
> "People should be asking the kinds of questions that I suspect the
> Premier of Queensland is asking, and of course he's now seen as the
> agent of Kevin Rudd."
>
> He says the important thing is that the public is now paying close
> attention to the way anti-terrorism laws are applied.
>
> "My perception, which is probably not an objective assessment, is that
> people watching on in the Haneef case are really starting to wonder
> about this taking the Government at face value on issues of
> terrorism," he said.
>
> "So I think we're making some progress; I think people are asking the
> questions and that's the important thing to be happening."
>