When racism and fascism converge 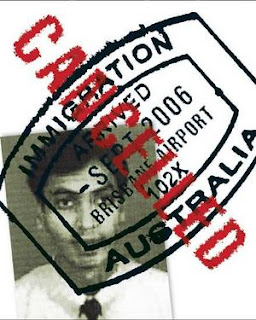 Mohamed Haneef has become the cause celebre for many who have warned about the consequences of racist and open-book anti-terrorism legislation on the erosion of civil liberties for us all. Creeping fascism in Oz. But many sections of the media are also appalling. The New Zealand Herald's front page story at the weekend headlined " 'Terror' doctor goes free" is a case in point - after the trumped up "terror" case had already collapsed. Six quick questions from the outraged on the Haneef campaign page at TwoCircles:

1. Is it a crime to buy and travel on one-way air tickets?
2. Are all relatives of a terrorist considered terrorists?
3. Dr. Haneef's SIM card was not involved in any terror activity.
4. Why was his wife's visa to Australia canceled?
5. When Dr. Haneef's visa was cancelled, why was he not deported?
6. Why was Dr. Asif Ali, friend of Dr. Haneef, harassed and why is he not allowed to say what happened to him when he was under detention?

The Federal Government is under mounting pressure to launch an inquiry into the handling of the Mohamed Haneef case.

Dr Haneef flew out of Australia for India early this morning after a terrorism-related charge against him was dropped due to lack of
evidence.

This morning Immigration Minister Kevin Andrews refused to reinstate
Dr Haneef's work visa and said he still had "suspicions" about him.

"The basis upon which Dr Haneef's visa was cancelled remains vaild,"
he told Channel Seven.

"His lawyers indicated to my department ... that he wanted to get out of Australia as soon as possible. If anything that rather heightens, rather than lessens, my suspicions."

Dr Haneef's lawyer Peter Russo says the Indian national is planning to fight in the courts to have his Australian work visa reinstated.

Meanwhile Queensland Premier Peter Beattie has repeated his criticisms over Mr Andrews' handling of the case.

"There needs to be a clear inquiry into what happened here," he told
Channel 10.

"I mean Kevin Andrews' behaviour in this does need to be subjected to greater scrutiny.

"Frankly I think Kevin Andrews has got a lot to answer for. The Prime
Minister should at the very least be disciplining him and I think he
should be the subject of an inquiry.

"Little wonder that Australian people are saying they're a little suss [suspicious] about what happened."

The Australian Council for Civil Liberties is calling for an urgent
review of the case.

The Council's president Terry O'Gorman says he will make a public interest complaint to the Australian Commission for Law Enforcement
Integrity.

He says the Integrity commissioner needs to urgently find out what
went wrong between the Australian Federal Police, the federal Director of Public Prosecutions and the Immigration Department.