Broadcaster and journalist Carol Archie posed some major challenges for the mainstream media about reporting Māori and current affairs at the launch of her new book, Pou Kōrero, at AUT University's marae today. She reckons Māori affairs reporters are being "dumped on" by their news organisations - expected to know everything and do everything Māori. She says it's time to break away from "specialist Māori reporting" - Māori affairs reporting should be carried out by all reporters, not just those who are Māori or specialise in Māori issues. Carol says all journalists have a responsibility to foster "a media of inclusiveness" to help New Zealanders develop their sense of identity. Launching the book, AUT Chancellor Sir Paul Reeves said terms such as "biculturalism" and "multiculturalism" promised much but fell short on delivery. But he added Pou Kōrero was an important contribution to cultural understanding and reporting. Carol describes the book as a "broader" version of Kawe Kōrero, originally written by Michael King and first pub 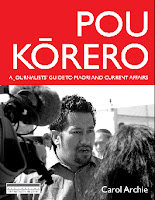 lished more than 20 years ago. Pou Kōrero is published by the NZ Journalists Training Organisation and the launching was hosted by AUT's Pacific Media Centre. While AUT has a proud record on diversity and cultural issues (it's the university whose student body most nearly matches the nation's ethnic mix), it wasn't a good look for the School of Communication Studies j-programme - the launch was only attended by two out of the eight journalism teaching staff! Diversity should start at home.
Photo by Del Abcede