Fiji's 'media cartel' on the mat 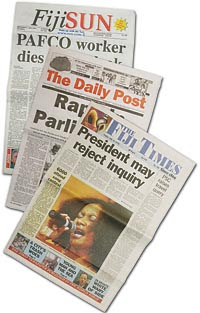 What a contrast between the open debate at "OurMedia" summit in New Zealand and the Fiji media. Fiji Media Council Daryl Tarte and his "media cartel", as Laminar Flow likes to brand them, have bunkered down in the face of the Human Rights Commission's inquiry into "media freedom and independence". The commission claimed the media wouldn't take part, a claim then denied by the media quartet - Communications Fiji, Fiji Sun, Fiji Television and the Fiji Times. Not convincing for many among the public. So it remains to be seen how investigator Dr James Anthony, of Hawaii, a onetime political adviser to the first Labour PM, Dr Timoci Bavadra, will get on. It isn't surprising that the local media is so defensive about how it operates. It has always been on the back foot when it comes to discussing media's role in society. And journalists themselves don't have the avenues for "making a noise", as media critic Judy McGregor suggested at OurMedia summit - as they would in New Zealand or many other countries. The first lesson is that freedom of the press is actually on behalf of citizens, not a corporate or business right. But that often isn't the reality. A. J. Liebling summed this up rather well. He once said: "Freedom of the press is guaranteed only to those who own one." Many quote him as saying media freedom is "limited" to press owners. However, freedom of the press also means freedom to put the media itself under an uncomfortable spotlight! I remember too well the hamfisted attempts by industry personalities to gag me when I critiqued media coverage in the aftermath of George Speight's 2000 coup. Over time those public record criticisms have been shown to be an accurate account (read the published paper in early 2001). But the real question is: Will an "inquiry" by a commission that has shown itself to be so partisan in support of the regime carry any weight?