Hidden voices - a Filipina Muslim on the US 'war on terror' 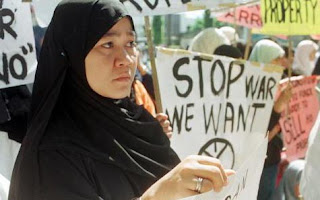 Amirah Ali Lidasan is national vice-chairperson of the Suara Bangsamoro Party List Organisation, which aims to get representation in Congress for the Philippines' several million Muslims (known as Moros and heavily concentrated in the southernmost islands). I've had an email from PSN's Murray Horton about her visit to NZ next month to talk about "The US 'war on terror' and its impact on her people". As Murray explains:
Amirah is a young progressive Muslim woman, with a history of senior leadership in the student movement in Manila, and is a leader in groups such as the Moro Christian People's Alliance. She has an international profile. In March 2007 she was part of a Philippine human rights delegation which toured North America and Europe, drawing international attention to the human rights crisis at home.
The Philippine military has been waging a full blown conventional war in the southern Philippines since the 1970s (simultaneous to the better known and equally long war against the Communist guerrillas throughout the whole country). Right now that war is seeing some of its heaviest fighting in decades, with direct involvement from the US Special Forces who have been
stationed in the southern Philippines since 2002. It has had hugely negative consequences for the whole Muslim population in the South (including Amirah and her family) and it has now become part and parcel of Bush's global "War on Terror" against "Islamic terrorists". Indeed, he has proclaimed the Philippines to be "The Second Front" in that war.
Dates: October 23-November 1, 2007
More details: Philippines Solidarity Network
Posted by café pacific at 2:25 PM