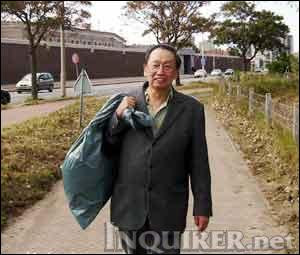 Filipino political dissident Jose Ma. Sison is out of jail and the Malacañang is far from happy. Dutch authorities set Sison free after a court ordered his release because the case accusing him of involvement in political murders of former colleagues in the Philippines had apparently collapsed. He is another political leader turned into a scapegoat by the US-led "war on terror". But, according to the Philippine Daily Inquirer, Sison, founder of the Communist Party of the Philippines (CPP) and its armed wing the New People's Army (NPA), isn't off the hook yet.
The District Court of The Hague reportedly hasn't precluded him from being prosecuted on murder charges. Spokesperson Wim de Bruin of the national prosecutor's office told the Inquirer: "The charges are not being dropped. The investigation will continue." The Malacañang is still hoping that the case against the communist leader will proceed.