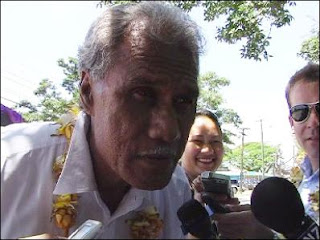 First the good news: Charges against Tonga's five People's Representatives accused over last November's rioting in Nukualofa, Tonga, have been cut back. The bad news? The outspoken MPs are still the Tongan establishment's main scapegoats for the rioting. They're now still facing one charge of sedition each. Chief Justice Anthony Ford has announced the drop of some charges in the Supreme Court.
According to Matangi Tonga, pro-democracy advocates 'Akilisi Pohiva, 'Isileli Pulu, Clive Edwards, 'Uliti Uata and Lepolo Taunisila, first appeared in the Nuku'alofa Supreme Court on July 18 and were charged with one count of sedition and six counts of abetment to cause disruption resulting in the destruction of six different premises, including the Molisi Tonga Supermarket, Pacific Royale Hotel, Tungi Arcade, Shoreline Building, Fung Shing Supermarket and the Leiola Duty Free Shop in the November 16 riot.
Chief Justice Ford told the court that it had received notice two days ago that Crown Law intended to withdraw the previous indictments and file new indictments of sedition only against each accused. All five accused were all present in court, pleading not guilty. Pictured: Scoop photo of 'Akilisi Pohiva