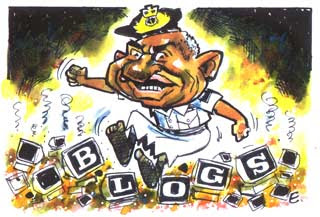 While regime chief Commodore Voreqe Bainimarama and the vexed Fiji question irritates a couple of pale southern neighbours at the Pacific Islands Forum in Tonga this week, Pacific Journalism Review has published an insightful inquiry into the post-coup blogging issue. And the regime has landed itself on hot coals. Sophie Foster, a onetime editor of the now defunct Pacific Islands Monthly and a former senior editorial hand at The Fiji Times, reckons the military is partly responsible for the number of political blogs that have expanded the media landscape in Fiji since the fourth coup last December. She says blogs have flourished because of the military squeeze on dissenting opinion. Sophie is now a postgraduate student in Pacific media studies at the University of the South Pacific in Suva and she is clearly making good use of her research time.
In her PJR paper, Sophie says that while some blog content was racist, defamatory, provocative and irresponsible, the argument for a free, responsible press has also been also strengthened as an option worth maintaining in any society. This edition of PJR has been produced jointly by the USP journalism programme and AUT University's Pacific Media Centre. PJR cover cartoon by top Kiwi cartoonist Malcolm Evans.
Incidentally, in the latest Reporters Sans Frontieres world press freedom index, bloggers are reported to be threatened as much as in international media.

Post grad student or not, it is a pity that some so called media experts like Sophie Foster ignore the pioneer Fiji blogs, which predates the 2006 coup.

It is also a fallacy to presume that all blogs in Fiji are anti-military. Or to conclude (without evidence)that the authors of these various blogs compelled to voice their disatisfactions, solely based upon the 2006 coup.

Could the emergence of Fiji blogs post 2006 coup more of a realization that, the media revolution has in fact enveloped Fiji, spawning a new culture of pampheleteering? Minus the printing press.