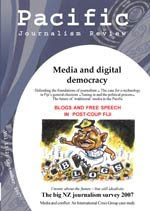 A survey of more than 500 New Zealand journalists has revealed marked unhappiness about levels of pay, resourcing and training, reports the Pacific Media Centre. The “Big Journalism 2007” survey found that, while many individual journalists are very satisfied with aspects of their jobs, overall most want improvements in (respectively) pay, support, mentoring and staffing levels.They want more opportunity for discussion and input into ethical and professional issues such as sensationalism, more guidance on how to cope with commercial and advertising pressures, and more time and resources to pursue investigations. The survey, titled "Under-paid, under-trained, under-resourced, unsure about the future - but still idealistic", published in the latest Pacific Journalism Review, is the first to ask NZ journalists what they think about a variety of topics such as quality of news coverage and their ethics and standards.
The survey revealed a generally ethical stance among journalists, with most agreeing that NZ journalists do not omit or distort relevant facts, and that stories are based on journalistic rather than political or commercial values. Asked to

rate the quality of NZ news coverage, journalists rated sports coverage the highest, while foreign coverage got the lowest rating, at slightly below average.