Fiji's 'how to gag the media' report 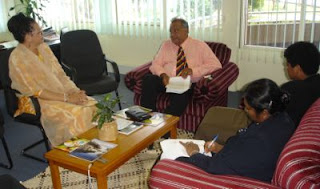 It is ironic that Jim Anthony's flawed report for the Fiji Human Rights Commission should be dubbed with an Orwellian title "Freedom and Independence of the Media in Fiji". It is far more like a "How to gag and shackle the media" report. It's the sort of report that gives even military-backed regimes bad reputations. A great pity. A constructive, well-researched and useful - but genuinely independent - examination of the Fiji media is long overdue. A 2007 review of the NZ Press Council is an example of the sort of thing that can be done. But the Anthony report doesn't show any interest in "free media" models that work well - he has been seduced by authoritarian straitjackets. Perhaps he isn't even aware of the M*A*S* work of the late Professor Claude-Jean Bertrand, the pioneer of global media accountability systems. A report as racist, provocative and ill-informed as this - with not even elementary referencing or sourcing - is rather embarrassing.
However, much of the media response in Fiji is also extraordinarily defensive and hypocritical, even bordering on hysterical. Why do they even bother to take such a report seriously? Surely the Anthony report deserved to quietly fade into oblivion - hardly worthy of any serious response. Yet some of the over-the-top reactions have ensured the Anthony report has gained far more international attention than it ever warranted. And certainly the spotlight is on foreign influence in media ownership. But the public deserves more than the defensive bleatings from self-interested media and political voices - where are the independent commentators and analysts for balance? The Fiji Times is one of the few to publish the odd independent reaction, such as from the Ecumenical Centre for Research Education and Advocacy (ECREA), which criticised the media for being the 'mouthpiece of the elite' and also for poor journalism standards. We also wonder about the timing of the report's release, given that it was made available hurriedly just three days after the arbitrary deportation of Fiji Times publisher Russell Hunter. Ousted Opposition leader Mick Beddoes described Dr Anthony as "paranoid", saying some of his "accusations and conclusions are not worth the paper they're printed on". A former deputy PM in Mahendra Chaudhry's People's Coalition government deposed by George Speight in 2000, Dr Tupeni Baba, dismissed the report as biased.
Dr Anthony told Radio New Zealand International that media and government relations had broken down, and for years the media had poured venom into Fiji's body politic: "Playing crybaby over this report isn't really going to wash. The media representatives, the media barons, were invited to participate in this report; they chose to boycott the inquiry. In my opinion, that was a fatally flawed decision."
Pictured: Fiji's Interim Minister for Labour and Tourism Bernadette Rounds-Ganilau is interviewed by Dr James Anthony during the media "inquiry". Source: Fiji Human Rights Commission website.
A quick summary of the report's recommendations:

It is typical that the racist part was overemphasized by you Robie and the media elite.
What is racist about the term "white"?

Should Caucasion be used instead?

Was it inaccurate that all Managing Directors/Publishers were Caucasion in a nation overwhelming Negroid?

Should fairness in the media also mean proportionate representation?

Seems you have turned on a dime, comparing you views on the Fiji Times post 2000 coup. I wonder why the media, including you have not commented on the glass ceiling of the Fiji media.

Why is that after 20 years of independence of Fiji; there still is NO ethnic Fijian or Indian publisher/Managing Director ever appointed?


You also have overlooked the local content aspect of the report; as well as the independence of the media authority. Why is that the majority of TV programs on Fiji TV are imported?
Why is there no local produced dramas; which could encourage the local film production capacity to develop and evolve?
Local means local.

I think the proposed media authority should enforce these nuances which the media elite have minimized.

Furthermore, the media authority could be of use in creating a broadcast team to televise Parliament, court hearings so that no one media company has monopoly over it. Consider based on the CSPAN model of the US.