Niu FM in the hot seat over its news credibility

Sadly, Pacific Radio News - which seemed a hot new prospect on the media scene in New Zealand last year, culminating with a commended recognition at the annual NZ Media Peace Awards event for its coverage of the Fiji and Tonga upheavals - is now itself embroiled in a crisis. PR stalwart Vienna Richards is now in charge and the PRN news service was dumped for a week while being "reviewed" - unheard of in the Kiwi media scene (although a RadioLIVE news package filled the gap). Some news staff are unhappy and worried about the future of the station's news credibility and survival. Pacific Radio News was back on air this week, but skipped a few bulletins. Listeners have commented on the drop in standards.
Parent company Niu FM was itself in the news last night with a Barbara Dreaver TVOne report angled on the station's "political appointment". The brother of Richards is William Sio, Labour Party candidate contesting the crucial South Auckland seat of Mangere for this year's general election. Political columnist Chris Trotter said: "The Labour government is funding this station, and they've just moved the news director aside to put in the candidate's sister in an election year. I think they really will have to reverse this decision."
Jason Brown filed a report for Pacific Media Watch, which gave a comprehensive coverage of Niu FM's chief executive Sina Moore's defence - but Sina was hardly convincing.

ALSO, congratulations to Jason and Courtenay Brooking who have won the AUT/PIMA Pasifika Communication Scholarships for this year. Courtenay is starting a three-yea 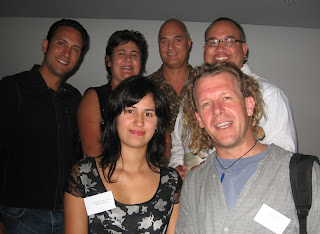