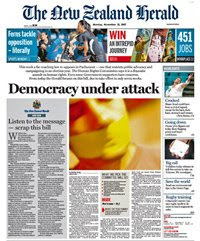 The New Zealand Herald is eating humble pie over its vigorous "democracy under attack" campaign against the passing of the Electoral Finance Act late last year. Today it was forced to run a brief front page item on the front page acknowledging that it had been rapped by the NZ Press Council over two of its editorials that misrepresented the curb on electoral campaign funding (but with fuller coverage of the adjudication inside). A complaint by the Coalition for Open Government against the Herald editorials of 4 December and 20 November 2007 has been upheld. As Victoria University law lecturer and author Steven Price, who brought the campaign on behalf of the coalition, notes on his Media Law Journal:
"The Herald fulminated that the bill would require anyone wanting to spend any of their own money electioneering to register with the Electoral Commission. That seemed to grossly restrict everyone’s political free speech - an impression underscored by the subhead 'Speak now or next year hold your peace'. But it wasn’t true. Only those who want to spend more than $12,000 electioneering (or $1000 in an electorate) need to register. Still, much better for the Herald’s campaign to brush over the fact that this would only affect a small number of wealthy people and organisations.
"Most irritating Herald argument: its mistake didn’t really matter as “it does not undermine our general view of the shortcomings of this bill.” Well, bully for the Herald. But one might have hoped that they would have felt embarrassed to advance this as a justification for failing to publish accurate information and let readers make up their own minds."