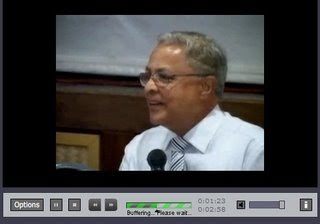 The Fiji news media gets a lot of ticking off these days. And a major critic remains Interim Finance Minister Mahendra Chaudhry, who just last month branded the media as "divisive and racist", saying it should be "licensed". He claims the media isn't responsible with the freedom it has been given. This is a familiar theme, of course, and he has filed Fiji's biggest-ever damages claim for defamation.
There were very defensive rumblings from the media in response to the recent discredited Anthony report on the "freedom and independence of the media". And there have been allegations by media of computer hacking. This led to a strong Fiji Times editorial challenging the regime - "put up or shut up"!.
But the flaws of the Anthony report don't change his essential message - there are serious problems in the Fiji media about training/professionalism and credibility and they need to be addressed. If not, then the regime or a future Fiji government is likely to impose something that is draconian and counter-productive.
Yes, the regime is disreputable and civil liberties, press freedom and the rule of law have been trampled on after the military coup. But media reports, such as in New Zealand, giving the impression that Fiji is a "Zimbabwe in the Pacific" (at least prior to the apparent ousting of Mugabe from office), is far from the truth. But, as many media people in Fiji point out, those not on the ground in Fiji and reading the reports would be inclined to be alarmed. The international image of Fiji has taken a battering, resulting in pressure from overseas governments and their refusal to grant any concessions to the regime.
The regime shot itself in the foot also by some misguided actions and is rightly blamed for the state of affairs. But the media is able to question and criticise the regime at will. There is some intimidation but not like in the early days of the coup.
In fact, if the media is put under as much scrutiny as the regime, there are many flaws in the coverage, but the reporting "power" is held by the media. The hysteria over the de-reservation of land that was kicked up and stoked by the media was clumsy and revealed lack of depth in reporting and editorial skills.
A big deal was made about the fact that reporters would no longer be able to call up the interim PM on his cell phone. Somehow this was supposed to be a yardstick for "media freedom". Where else in the world can journalists call up a PM on the phone for interviews?
It has been forgotten that the military ousted a government that was racist, divisive, corrupt and inefficient and consorting with coup-makers. The difference was that the Qarase government was cynically using democracy and existing laws to legalise its racist and illegal policies.
One of Qarase's ministers referred to Indo-Fijians as "weeds taking up too much space" while some senators called reporters "Satan's agents". They were not even reprimanded. In his last days, Qarase, in a desperate bid to cling to power, tried to incite indigenous Fijians to rise against Indo-Fijians by claiming that they supported the military.
So the man was willing to see the shedding of blood to remain in power. It was another example of how callously some leaders use the people for their own benefit. The media, naïve as it is, has made a ruthless politician and a dangerous leader like Qarase, appear "angelical"!
The Qarase government should also share blame for the coup. Had it remained in power, it is quite likely we would have seen some coup-makers in Senate, Parliament, in plum government jobs and holding board memberships. It would have increased consumption tax to 15 per cent to pay for its reckless spending. This would have strangled the poor even further.
If not for the coup, the shenanigans at the Fiji National Provident Fund would not have come to light. The national pension scheme quite likely would have gone down the tubes as the National Bank of Fiji did. Under the Qarase regime, even the workers' pension scheme was not safe or sacred.
Fiji had become a magnet and haven for conmen and carpetbaggers. There is criticism that no "hard evidence" has been uncovered to prove widespread corruption as claimed. Corruption is never easy to prove, more so in a country like Fiji which simply does not have the expertise. But there is enough prima-facie and anecdotal evidence to show there was something very sick in many organisations.
Journalists in countries such as New Zealand need to be prepared do the research, talk to credible people and get a cross-section of views instead of repeatedly using biased sources who are often not even in Fiji. Constantly only talking to those hurt by the military and who have reasons to hate it, inevitably serve up a less than balanced view.
There are many people with an axe to grind against the military, and there is a danger of them using the media to achieve this end. Of course the media will be quick to deny any such possibility but we all saw how easily the media was manipulated during the Speight and Rabuka coups. The media needs to be careful that it doesn't inflame racial feelings and buy into imposed external solutions with a double standard. The struggle for democracy could easily explode into an Timor-Leste style catastrophe.