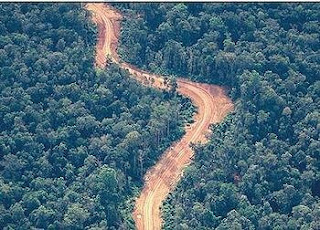 Papua New Guinea's forests are shrinking faster than the Amazon, says the New Scientist in its latest edition (2659). This report is one of a host sparked in global media this week from a joint new state-of-the-nation's-forests report prepared by a joint University of Papua New Guinea and Australian National University team. The New Scientist summary says:
The lush tropical rainforests of Papua New Guinea are not the unspoilt haven that many believed till now. In fact, they are disappearing faster than those in the Amazon.
That's the conclusion of a team led by Phil Shearman of the Remote Sensing Centre at UPNG in Port Moresby, who applied pattern recognition software to recent satellite images, and paired the results with map data from the 1970s to reconstruct the rate of forest loss. The team presented its findings ... at a workshop on climate change, forests and carbon trading in Port Moresby.
Their study found that in 2002, 1.4 per cent of PNG's forests were cleared or degraded, increasing to 1.7 per cent in 2007. If the trend continues, more than half the forest that existed when PNG became independent from Australia in 1975 will be gone by 2021.

The Guardian reported in a bylined piece by David Adam:
The forests of Papua New Guinea are being chopped down so quickly that more than half its trees could be lost by 2021 ... Papua New Guinea has the world's third largest tropical forest, but it was being cleared or degraded at a rate of 362,000 hectares (895,000 acres) a year in 2001, the report said.
Phil Shearman, lead author of the study, said: "Forests are being logged repeatedly and wastefully with little regard for the environmental consequences, and with at least the passive complicity of government authorities."
The researchers compared satellite images taken over three decades from the early 1970s. In 1972 the country had 38m hectares (94m acres), of rainforest covering 82 percent of the country. About 15 percent of that was cleared by 2002.
Shearman said: "For the first time we have evidence of what's happening. The government could make a significant contribution to global efforts to combat climate change, as this nation is particularly susceptible to negative effects due to loss of the forest cover."
Pictured: Not far behind the PNG rainforest roads, the rapacious loggers. Source: UPNG report.