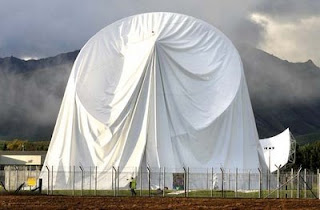 t stage of her tour exposing the impact of foreign military bases on sovereignty ... especially for indigenous peoples. She may not have made a mark yet in the mainstream media, but she has certainly stirred some ripples in the South Pacific pond. She is no stranger to New Zealand, having been here on several occasions with her previous Nuclear-free and Independent Pacific work. Nowadays lawyer Fabros is Asia-Pacific coordinator of the Manila-based International Network for the Abolition of Foreign Military Bases. She is a guest of NZ's Anti-Bases Campaign and is visiting spy bases around the country - including Waihopai (above), the base that

attracted international attention when Ploughshare protesters sneaked into the site in a daring "raid" and deflated one of the large inflatable domes covering a radar dish. Comments by Cora reported in today's Marlborough Express:
"Information gleaned by the Waihopai Valley spy base is giving the United
States an unfair economic advantage ...
"Fabros described April's attack as a "very creative" way of bringing
attention to the facility.
"I really admire the courage of our friends who did this."
"She said Waihopai was ... spying on the communications of the Pacific Islands and the
information was part of the pool of data used by the US.
"That to me is very deceptive and a violation of the sovereignty of
independent nations."
Cora is speaking at the Pacific Media Centre on Thursday, July 17, 5-6.30pm, WT032, AUT Tower, Ground Floor, AUT University, Auckland (opposite Aotea Square). Don't miss the chance to hear her. More info? Contact Del Abcede: (+649) 921 9388.
Posted by café pacific at 10:24 PM