A YEAR ago Tempo Semanal published a series of stories that became known as the "SMS Scandal" in which it alleged corruption by Timor-Leste's Justice Minister Lucia Lobato, along with Timorese and Indonesian business people, in relation to projects under her ministry. These projects included the Becora Prison, uniforms for prison guards and Timor-Leste national identity cards projects.

Café Pacific has followed this affair and TS stories include:

Lobato reacted angrily and in October 2008 lodged a criminal libel case against Tempo Semanal and its director José Antonio Belo. 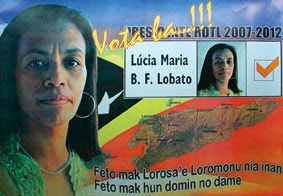 Lobato reported the case of criminal defamation against José Belo to prosecutors. Belo was investigated by the International Prosecutor on 19 January 2009 and has been under city detention since then. He has to report to the prosecutor if he wants to travel away from Dili more than 15 days. Since last year, Belo has only made two trips out of Timor-Leste and had to refuse three invitations for foreign travel. He went to Australia for 10 days and to Indonesia for four days.

These letters informed Tempo Semanal officially that the case of criminal defamation had ceased on 15 June 2009 and were signed by International Prosecutor Jose Landim.

The crime of defamation was decriminalised by the new Timor-Leste Criminal Code, DL No. 19/2009 of 8 April 2009, as a result of which the accused can no longer be held criminally liable.

In effect, pursuant to the provisions of article 3, 1. of Timor-Leste's new Criminal Code, 'nobody can be held criminally liable as a result of facts prescribed as criminal acts at the relevant time it was carried into action if the law subsequently ceases to consider it as a crime'.

As such, because it is not now possible to continue with the criminal proceedings against the accused, the proceedings currently on foot are hereby ordered to be closed pursuant to article 235, 1. c) of the Criminal Code.

Tempo Semanal director Jose Antonio Belo congratulated the Prosecutor-General and all her staff by putting the law in place. However, at the same time Belo was disappointed the case would not reach court so that the facts of the corruption case might come before the public.

Belo said he was aware that the then Prosecutor-General had demanded that Justice Minister Lucia Lobato submit more evidence before the case could be sent to court:

Tempo Semanal and I have been left in confusion for an entire year and we don't know the situation of the case against us but this afternoon we have receive this notification letter.

As a Timorese journalist, it is very sad to see our Minister of Justice's actions by lodging a criminal defamation case against Tempo Semanal and me while her office was producing the new East Timor Penal Code which decriminalised defamation.

It seems like the Minister for Justice is confused about Timorese law.

Belo said he would like to make it clear to Tempo Semanal readers that “we are not afraid to go court to prove our story and that's why we have requested the kindness from the good office of the deputy Prime Minister to encourage the Minister of Justice to carry on the case.”

Jose Belo and Tempo Semanal also thanked all those friends who gave courage and support at this difficult time.

It remains unclear if the minister will ever faces charge in relation to the accusations of corruption that have been made against her by Tempo Semanal, the Provedor, the Parliamentary Opposition and many others.