PFF makes a blue with the Fiji regime's propaganda 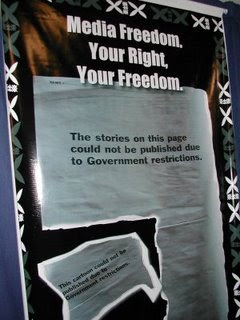 MEDIA lobby group Pacific Freedom Forum shot itself in the foot this week with an over-the-top media release shorn of its usual measured tone. Aghast at the Fiji Attorney-General being given an “unchallenged” platform at the University of the South Pacific’s regional journalism programme to peddle the regime’s usual spin, the PFF fired off a media missile claiming that Aiyaz Sayed-Khaiyum had “erased his own credibility with ‘delusional’ notions that Fiji has a free media”. What’s new?

The tone of this media release was along the lines of let’s fight censorship with censorship. In fact, the PFF itself lost some credibility with this latest release. The backroom scribes need to brush up on their Voltaire.

Also, there was a touch of disinformation in the release as well while praising the Fiji Times' “award-winning free speech campaign as announced on Friday night in Australia”. Café Pacific points out that this was an in-house award by Rupert Murdoch’s News Ltd group (he was even there for the occasion). This was not disclosed by PFF.

Also, it is interesting to see that PFF has little to say about the strategies of the two other Fiji dailies, the Fiji Sun and Daily Post – both very different from the Fiji Times, and some would say more focused on rebuilding the Fiji of tomorrow than playing the pathetic Australian and NZ interventionists’ card. Well, of course – the FT group is Australian owned.

A former Fiji Daily Post publisher, Ranjit Singh, who holds rather pungent views on the Fiji news media noted - while sarcastically commenting on the “prestigious award”:

The question that has been bugging me, and I suppose other like-thinking people, is this: Had the Fiji media been more responsible, more impartial, more balanced, more ‘outrageous’ [whatever he means by this] and more questioning in raising the issues of poor governance practised by Laisenia Qarase and his SDL government, would we have been able to avert the December 2006 takeover by Bainimarama?

Probably not. But that still doesn’t soften the case for a more balanced media. The recent publication of the "media and democracy" edition of Fijian Studies, the journal published by the Fiji Institute of Technology director Dr Ganesh Chand, canvassed many of the issues of media balance and quality over two decades of coup culture and poses fundamental questions of what has been learned by the media during that period. (The edition was edited by two USP staff - economics professor Biman Prasad and head of journalism Shailendra Singh). Some 26 contributors with wide-ranging research and views (including a senior Fiji Times staffer) provided in-depth fodder for the debate. Many journalists were on hand for the launch. Yet the Fiji media picked up on virtually none of it.

This volume, in fact, lays bare the Fiji media’s shortcomings – and strengths, but also contains much of the ammunition needed to challenge the AG’s rigid regime view of the news industry.

Café Pacific reckons Khaiyum’s host for the seminar, USP journalism, should take a bow for the activities it has been promoting in spite of Fiji's climate of censorship and self-censorship. The news on the ground was that some gutsy questions were asked by several of the student journalists – and also other media people present – but Pacific Scoop’s reporter on the spot, Nanise Nawalowao, didn't pick up on some of these in her story. According to staff:

Unfortunately, the AG seminar was confirmed just two days before the event and we did not have time for the best briefing with students. We are always training and urging students to challenge speakers.

An important point that commentators often naively overlook is that university students are just making a career start – they haven’t been around the traps like them. Students are often 10 to 20 years younger and nowhere near as experienced or mature as they may be. Pacific Islanders are often reluctant to question those in authority. It is often a reality in the Pacific media industry - and many a news conference.

But at least USP is actually engaging with all sides and trying to build up some balanced expertise among tomorrow’s journos. The university’s journalism programme has organised several seminars this year - and many over the years - including during the launch of Fijian Studies and one by this year’s PINA media award winners from Port Vila.

In just a few weeks, USP has staged three seminars on the media in spite of state censorship.

USP journalism has been more actively drumming up media debates than any other organisation - not just this year, but over the years. In fact, there has been more public discussion about the media in Fiji than in any other Pacific country, largely due to USP journalism efforts – even under the shadow of a coup.

A challenge lies there for other media sectors and Pacific journalists.

You're spot on about the shortcomings of the Fiji media and especially that dreadful Murdoch rag, the Fiji Times.

The FT has been the country's newspaper of record since 1869 yet has chosen to ignore most of the critical political developments in recent months.

For most discerning readers of the paper, its current policy reeks of pique. Highly profitable yet chronically underfunded, the truth is the FT is the main reason why the Fiji media hasn't progressed much beyond undergraduate standard period.

Locals are left shaking their heads that Rupert Murdoch can bestow any award on a paper that nowadays carries column inches of non-news and continually ignores significant national events. In any other market, he'd be laughed out of town.

You now have to buy the FT's rival, the Fiji Sun, to know what's really going on in Fiji, the ultimate indictment of the paper and the two idiots who run it.

Editor Netani Rika fancies himself as some kind of South Seas Donald Woods, waging war against the oppressor and running a highly personal crusade against the regime.

Rather than do the sensible thing and rein him in, Rika is backed to the hilt by the unfortunate Ann Fussell, the woman News Limited installed as publisher after the expulsions of Rex Gardner and Evan Hannah.

Instead of examining how a series of journalistic howlers eroded the FT's reputation and incurred the regime's ire, Rika and Fussell choose instead to wear the mantle of the persecuted.

Fortunately, their readers happen to be much smarter and know that the Fiji Times has brought much of the regime's wrath upon itself.

For 18 months after his 2006 coup, Frank Bainimarama allowed the FT the latitude to get its house in order. It didn't and his patience snapped.

That's called bad management at the paper, not journalistic courage, and the proof of that is when stories are uniformly substandard or just plain wrong.

Now the FT wallows in irrelevance while the preening Rika travels the region collecting accolades for his "courage". It's time to blow the final whistle on the lot of them.

PFF is simplistic and its "fight censorship with censorship" stance rather hollow. From its statement, one could assume there is only one newspaper in Fiji, the Fiji Times, and what Ftimes says is the truth, nothing but the truth. How naive. It is really much more complicated than that.

This is the problem with "parachute experts" assuming they know better than locals who digest Fiji news daily. Judging by the PFF statement, only the Fiji Times views matter. What about Fiji Sun and Daily Post views which is different from the Fiji Times? Does it matter? Or is PFF only interested in anti-regime propaganda? Where is the balance PFF preaches to others?

In future PFF should be more careful. Firing from the hip risks it losing credibility as informed commentators. PFF press releases are sounding too shrill. The writers need to be more retrained when commenting on countries they do not live in, when they have no idea about the difficulties in that country and have a poor grasp of the complexities, as in the Fiji case.

Otherwise they risk painting a one-sided and jaundiced version of the situation. They do harm rather than good.

While I do agree about the shortcomings of the Fiji media, your comments fall short of exploring the real-life experience - threats, abusive phone calls, intimidation - that journalists and senior media personnel have been experiencing. I would have expected the same kind of response expressed during 1987 and 2000. It appears this regime, despite its well-documented acts of terror against Fiji citizens, is better in the eyes of Cafe Pacific