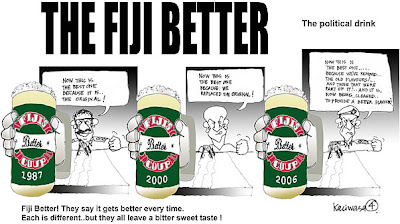 THE GREAT pension saga in Fiji has drawn a satirical response from one of Café Pacific's regular readers - "Sas". This follows a news item that revealed a rather vindictive response from the Fiji regime towards founding coup leader Sitiveni Rabuka (not content with one coup, he pulled off two in 1987 - four months apart). Rabuka's government pension was cut off. The Citizens' Constitutional Forum warned that stopping pensions was an abuse of power and a violation of International Labour Organisation (ILO) conventions. (Cartoon: Kaciwasa)

I am writing to you in great distress, as I fear that both my pension of $60 a month and my child’s education are in jeopardy because of my failure to be a good person and I beg your forgiveness.

It began the other day when my five-year-old son Osama asked if he could come and shop with me in town. I said “Yes” to him and Osama seemed so happy. We were going to Rups Store in Suva, as there my small salary seems to be worth more than in Proud’s Duty Free Shop.

We arrived in Rups luxurious store and Osama asked me to buy him something. My money was limited and I said “No” to his repeated cries. Without my consent he took something from a shelf.

I immediately told him he had to put the object back, which I noticed was a plastic toy gun. My son began to defy me so I had to raise my voice. I said in a clear strong voice: “Osama, put that gun down”.

I wished I had never said those words. The whole shop stopped. People threw themselves on the floor. Men screamed and others began to pray. Within seconds a platoon of soldiers rushed into the store firing guns in all directions. It was dreadful to watch the horror unfolding before my eyes at the bullets hitting cups, saucers and shooting holes in saris.

The staff on duty were terrified. One officer shouted out, “Where is he?” A teenage shop assistant dried her tears and pointed at Osama. Six soldiers jumped on my four-year-old son, held him down and called for re-enforcements. An army officer came into the room and took control.

“Remove his gun,” screamed the officer. Six soldiers twisted Osama’s arm to get the gun. He was so angry and kept screaming: “I want a gun, I want a gun."

The gun was finally wrested away from Osama and the officer asked him for his name and address. He became stubborn and refused to talk. The officer looked at me and asked if I was his father. I nodded and was immediately stripped naked in the shop and searched for guns, bombs or weapons of mass destruction imported from Australia or New Zealand through their High Commissions.

Fortunately, I had none, as I am a poor man and I have never left Suva.

All the army officer could find was my pension book. It was taken away from me. The officer who looked at it, snapped at me: “We will keep this. We know how to deal with you”.

I felt distressed and asked if I could leave. I was then given permission to go home.

The first question as I entered my front door was from my wife, asking why Osama was not with me. It was only then I remembered I had left him behind. So I went back to Rups Store, but he was gone.

I noticed that they already had a large sale sign up saying damaged cup and saucers and saris were being sold at a special cheap price. It was a golden opportunity to get a bargain, so I bought my wife a sari with bullet holes in it.

I knew that she would be able to repair it and wear it on Fiji Independence Day to celebrate the progress of Fiji towards freedom and wealth for all.

I went home feeling happy that I had a bargain that would make my hardworking wife happy. But she said I had bought the wrong colour sari and she again asked where Osama was.

I returned to Rups Store to look for Osama. He had been taken to the Queen Elizabeth army barracks. Immediately I went there and was placed under armed guard. I was strip searched again for weapons of mass destruction and then led through several corridors to the cell where Osama was being I interrogated. I could hear him screaming: “No, no, no."

He was wild and was refusing to answer questions. Whenever a soldier waved a gun in front at him to make him talk, he began screaming: “I want that gun, I want that gun”.

Two colonels were conducting the investigation, but it was no use. Osama was obstinate.

Many hours later when it was dark I was allowed to take Osama home with the words of the colonels echoing in my ears: “We will fix both you and him, bro.”

We got home and fed Osama, put him to bed and I comforted my wife. Late that night I thought of what else I could do to ask you, my Commodore, my appointed leader, to forgive Osama for his actions. My wife and I decided to make Osama write a letter of apology for his actions. We would then send it to the newspapers to be published.

In the morning, Osama was in a good mood as he had slept well and he began writing the letter. This pleased his mother and me. When the letter was finished we could not read it as we are both illiterate, and our hopes for the future are with little Osama.

The letter was duly published but I regret that I have to apologise for what he said. Instead of writing “Dear Sir” at the start of the letter, he wrote “Dear Cur”. Please forgive him this spelling mistake, he is a small boy. He also said you were a “great free loader” when he meant to say “great Fiji leader”

It appears your media “minders” at the newspapers did not pick up the errors.

I beg of you to return my pension, which I use to feed myself, Osama, my wife and 20 other relatives who cannot find paid work. The pension also pays for Osama’s education.

To deprive me of my pension, because of my small son’s actions, means that we will join the almost one hundred thousand squatters living in squalor between Vatuwaqa and Nausori. When I asked the squatters in Vatuwaqa if we join them, they told us to go away as the army had promised them work and new homes if they just kept making people chatter.

I think they mean the People’s Charter.

I humbly request the return of my pension to feed my family and to buy Osama a school bag. He is my future, I want him to have a good education and a job when he grows up so that he may never again address you as “Dear Cur”.

With affection for your promises.

Former Fiji prime minister and coup leader, Sitiveni Rabuka, has had his government pension cancelled by the interim government.

That man who staged Fiji's first ever coup in 1987 has had his benefits taken off him, including a government-supplied four wheel drive vehicle, which was confiscated from him on the spot.

Last week the interim prime minister, Commodore Frank Bainimarama, announced that Fiji pensioners who criticise his government will have their pensions stopped.

Mr Rabuka told Radio Australia's Pacific Beat programme he had to walk an hour back to his village when the soldiers who brought him a letter about his pension being stopped took his vehicle while he was out picking coconuts.

The Interim Government will be committing acts of abuse of power and misuse of funds, as well as violating International Labour Organisation (ILO) conventions if it passes a decree to stop pension payments to its critics, says the Citizens’ Constitutional Forum (CCF).

Interim Prime Minister Commodore Voreqe Bainimarama revealed in the daily news today that this decree was passed last week, however, the decree has not yet become available to the public, and rumours are it is yet to be created

NB. Commodore Bainimarama approved the draft of the People’s Charter in December 2008 with the eleven key pillars for Fiji’s future development.
Posted by café pacific at 12:49 AM

The "letter" is brilliant. Pure satire, it exposes the numerous petty excesses of Government, but it rests on one important misrepresentation: Ordinary pensions are not being stopped and ordinary people deprived of an income derived in part from the FNPF contributions. The pensions stopped are those of former politicians to which they made no financial contributions. They are paid by the State they seek to undermine.

Enjoy the "letter" but be aware that political satire is a powerful weapon that is sometimes aimed deliberatly off-target.